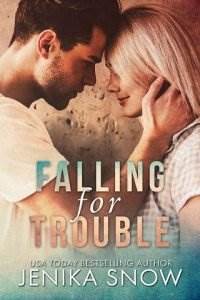 Sophia sat on the old, half-broken deck, her feet dangling off the sides, the cool water lapping at her toes. Sometimes, if she just closed her eyes, she could imagine herself in another world, one where everything was good and right. The only problem was she eventually had to open her eyes and come face-to-face with reality.

“You’re thinking again, Kid.” Abe sat beside her, nudging his shoulder against hers. Even at sixteen, Abe was big with hard lines of muscles and long limbs. They had been through a lot together, and if not for him, she would have crumbled at the first opportunity.

Sophia turned and looked at him, the setting sun causing a swatch of golden color to slash across his too-handsome face. Just looking at him caused Sophia’s heart to race. Dark hair swooped across his forehead, and his eyes, so blue they almost seemed unreal, stared back at her. He was trouble with a capital T.

There wasn’t a girl in town who didn’t want Abe Rochester, and there wasn’t a girl he didn’t like to give that time to… well, except her. He didn’t look at her like he did the other girls: all half-lidded gazes, smooth words, and a smile that dropped panties left and right. No, Abe looked at her like a little sister, and for the first time in her life, she thought that really sucked.

“Thinking is about all I can do anymore.” She smiled, not really knowing what she meant by that comment or if it even made any sense. Being around Abe seemed to cause the wires in her brain to malfunction all at once. It was like overnight she realized she cared for him as more than her best friend.

His big hand covered hers, and she turned her gaze back toward the pond. The sun was just starting to set, and the light hit the water, casting tiny crystalline shards across the silky top.

“One day, all of this isn’t going to matter, Sophie girl.” His hand tightened on hers, and she moved closer, resting her head on his shoulder. “The shitty things that happened to you, the asshats who think they can mess with you, everything, Soph.” She knew he was right. “I’m always going to look out for you, Kid, always.”

Sophia didn’t doubt Abe’s words, but there was always doubt inside her, always the fear that her life would always be like this.

“You think too hard, Soph.”

She lifted her head and looked up at him. “Sometimes you can’t just erase what happened and look for a brighter future.”

Pain danced behind his eyes, and he looked away. His jaw tightened. For several long moments, nothing was said, but the emotions were thick enough to suffocate her.

“I know, but when life gives you an ugly hand, you have to lean on the people who love you and hope they will see you through.” He looked at her again and kissed her forehead. “I love you, Sophia, and that will never change. Even if I have to try with my last breath, I’m going to make things better for you.”

She really hoped that was the truth, but sometimes the ugliness in people’s lives didn’t stay in the past.

“Hey, baby. How ’bout you and me go back to your place for a little fun?”

Sophia rolled her eyes as she poured three shots of Crown. The woman who spoke sidled up to Abe, her best friend for as long as she could remember. She wore a top that looked like it belonged on the beach and a jean skirt so short there was no doubt in Sophia’s mind that she’d get a clear shot of her pussy when she bent over.

She slid one of the shots to Abe, and he smiled in thanks. The girl, who she thought was named Maxine or Maxi… something like that, rubbed her huge tits on Abe’s thick, tattooed arm.

Abe was a gorgeous man, all six foot three inches of him, and so whenever he came to Tiny’s there were always women who checked him out. Sophia hated it. His muscles and tattoos tended to make guys leery of him, but there was always that one drunken asshole who thought he could take Abe. Obviously, they didn’t know his reputation.

There were a few times he got a shiner, but if Sophia were being honest, he deserved them. When alcohol was in the mix, Abe thought he was invincible.

Abe Rochester was considered the town bad boy. He may have been dubbed “Trouble,” but Sophia knew a different side of him, a side that wasn’t drunk every other day, getting into brawls, and fucking anything with a pussy. He was the boy she followed to the fishing hole when they were ten, the guy who held her when she was fifteen and crying because Frankie Gutten had called her ugly… and the same one who beat the shit out of Frankie for saying she was ugly.