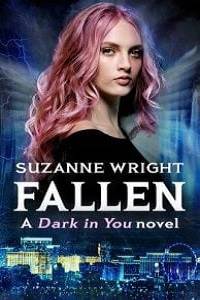 Switching off the ignition, Raini Campbell let out a shaky breath. She could hear the thumping music filtering out of the nightclub up ahead. There was a long line of people waiting to enter, just as there had been on the first and only other time she’d come to the Damned.

Raini felt her hands flex around the steering wheel. She’d sworn she’d never come back here. She’d sworn she’d keep her distance from him. And she really would have. Probably. But right now, she needed help. Needed intel. And Maddox Quentin, well, he was a man who knew things. A powerful Prime who gathered information for a living.

He was also a descendant—a breed of demon that possessed angelic blood, since one of their earliest ancestors had been a fallen angel. She’d once heard that some archangels had fallen, too. Right now, she desperately needed the aid of one, but there was no way to contact an archangel, and they had no interest in Earth-related matters anyway. A demon with archangelic blood, though? They might be able and willing to help. If such a being existed, surely Maddox would know about it.

Of course, there was no saying that he’d tell her if he did. He was her anchor—or predestined psychic mate, to be precise— but they hadn’t bonded. Which was why her inner demon was perpetually pissed these days. It had initially been excited on finding its anchor. But the longer he’d gone without trying to form the bond, the more the entity felt the urge to rip out his spinal cord.

Demons came in pairs, but it wasn’t an emotional pairing like with shifters; it was purely psychic. When a demon fused their psyche with that of their anchor, an unbreakable link formed that enabled them both to have the power, strength, and mental stability to assert dominance over their inner entity. This meant they would never turn rogue—something that could otherwise easily happen, given how difficult it was to share your soul with what was essentially a psychopath.

Anchors were utterly loyal to each other and played a big part in each other’s lives. Growing up, Raini had longed to find her own; to have someone who’d support and shield her, who she could trust wholeheartedly. And now she’d found him. Only … he wasn’t what she’d expected.

Maddox Quentin was cold. Unremorseful. Calculated. Not to be trusted. Possessed few ethics.

Now, to be fair, some would say the latter two qualities could also be applied to not only her father but the majority of her lair—imps specialized in everything from lying and thievery to embezzlement and identity theft. But Maddox was far more ruthless than they could ever be. He brokered the kind of deals that others wouldn’t touch; the kind that had people kidnapped, for Christ’s sake.

More, he was a man who knew how to ferret out secrets. That wasn’t good. Because Raini needed hers to stay hidden. Which was largely why she’d been set on keeping her distance from him. If he’d wanted to form the bond, it would have been different, because she could have trusted that he’d never betray her confidence. But he had no interest in claiming her as his anchor.

Still, he hadn’t turned his back on her. He telepathically reached out to her on a daily basis, even though she never replied. And she suspected he had some of his lair members subtly check on her occasionally. But that didn’t mean he’d help her now.

Who would, in his position?

She’d ignored him for months. She’d been intent on cutting him out of her life. And now she was appearing at his club to ask something of him. It made her seem like a total bitch, but she wouldn’t so unfairly do this if it wasn’t an emergency.

Her girls—women she’d grown up with, built up a business with, and who’d always been there for her—were more like her honorary sisters, and she loved them with everything in her. Now, one of them was dying. Khloë was literally on her deathbed, her body ravaged by the death essence that flowed through her. And they were all helpless to save her.

Raini closed her eyes. Dread twisted her stomach, thickened her throat, and made hot tears burn the backs of her eyes. If there was one person who deserved to live—who knew how to live—it was Khloë. But only pure life could destroy death essence, and so they needed an archangel. A demon with archangelic blood would be the next best thing.

Maybe such beings existed, maybe they didn’t. Maybe they could help, maybe they couldn’t. Raini had nothing to lose by trying to find out. So she did another thing she’d sworn she’d never do. She telepathically reached out to Maddox. I’m outside your club.

His mind slid against hers, coldly sensual and far too familiar. I know.