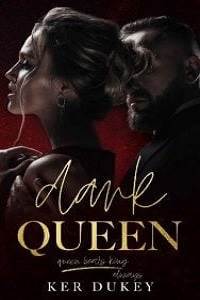 A queen will always turn pain into power

Pain, sharp and pulsing, explodes within my flesh, spreading like a wildfire up my back and abdomen.

The shocked eyes of the man who promised me safety will be the last thing I ever see.

The intensity steals my breath.

My mouth opens, but only a squeaked, inhuman noise exits.

My sight becomes cloudy, tears welling and falling to my cheeks.

Is this how Mom felt?

My chest aches as the pounding slows.

How can it end like this? I was a queen—his queen—and it will be his kingdom that kills me.

A couple of months before…

Burying my mother left me with a sense of freedom. I could finally breathe, and that opened a pocket of guilt inside my chest.

I need to get out of here.

She was ill for such a prolonged period, I came to terms with the fact that she was dying a long time ago, but I didn’t think it would be so slow, so degrading.

She withered away painfully, lost herself day by day, until all that was left was a pathetic carcass unable to even relieve her bladder on her own terms.

Those thoughts fill out that pocket, expanding within me.

I’m drowning in it.

“Is it wrong to feel like she died well before she stopped breathing?” I wonder aloud, the memory of her ragged breathing and coughing rattling her chest bone lingering within me.

She sounded like a spluttering generator out of gas. The noise still haunts my dreams.

Clint, my best friend for over a decade, looks at me. “No. Her battle was long and hard on you both,” he reassures, like a good friend should.

Though, I’m not sure if he means hard on me and Mom or me and Dad.

My dad will be fine. They practically became strangers over the years, two ships docking at the same port but completely separate entities.

Sometimes I wonder if they only stayed together because of some messed up sense of duty they thought they owed me…or themselves…or the world.

The truth is, Mom resented Dad for ruining her chance to take her dance career to the next level.

Resentment is corrosive. It rotted away inside her until all that remained was a bitter, angry woman.

She channeled all that poison into me, molding me into what she wanted for herself.

“Make a wish,” Clint says, pointing up at a shooting star.

We lay in the field at the back of my house under the inky night sky, the humming of crickets all around us, night animals coming awake in the woods at the border of our property.

Clint’s hand nudges mine, hoping I’ll take it, but I won’t. No matter how hard I wish I had those feelings for him, I don’t.

If anything, he bores me. But it would crush him to know I hate these nights with him. I only used to come out here to escape the sounds of mom’s death rattle.

It would be easier if my heart wanted him—hell, even my body—but neither are drawn to him.

I tilt my head toward him, taking him in, memorizing his features to keep me company on lonely days in the big city.

He’s handsome in a typical kind of way.

His wavy blond hair casually falls over his forehead, making it hard not to notice his pretty blue eyes with flecks of lighter shades throughout the irises.

Playing lacrosse has given him an athletic physique most girls get giddy over.

He’s well-liked, popular, and could have any girl he chooses, but he’d rather hang out with me.

I don’t see why he even likes me—I don’t even like me half the time.

We don’t have a lot in common. I dedicate most of my time to dance, and he just slots himself in my life wherever he can.

He’s lived across the small lake from me since I can remember, always joking we’re the real-life Dawson and Joey from Dawson’s Creek, a show we watched re-runs of with Mom while she slowly faded away.

I’m no Joey, though. There’s no deep-seated crush, no good girl virgin waiting for him to notice me.

He did notice me.

The looks he thought were subtle, the brush of his hands against my body at any opportunity, the anger toward anyone who would flirt with me.

I’ve known for a long time he’s wanted more, but the very thought of settling here, living the same life my mother did, cripples me with dread.

“Ally.” He nudges me, his brow furrowed, and I realize I’m still staring at him.

Turning away, I say, “It’ll depend on if I get in.” Smiling wistfully, I think to myself, I have to get in.

Sighing, he pulls at the blades of grass. “You’ll get in. You’re the best dancer I know, and they invited you, right?”