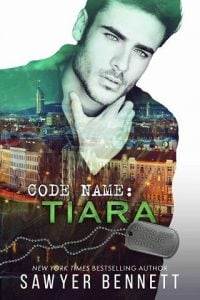 “You are Jackson Gale, former Navy SEAL and one badass motherfucker,” I say to my reflection after wiping the fog from the bathroom mirror.

Pressing my palms down on the vanity, I continue my pep talk. “You save hostages. You obliterate foreign terrorists.”

My gaze flicks to the myriad of tattoos on my right arm, a full sleeve of commemorations and important insignia during my time as a SEAL. There’s some ink on my chest, a bit on my right ribs that curve around to my lower abdomen and disappear into the towel tied around my waist. Chicks love to follow that tattoo south.

Hazel eyes moving back to the mirror so I can look myself square in the face, I say with absolute certainty, “You most certainly do not babysit princesses.”

I stare at my reflection a good long time.

Give a firm nod, because I mean it.

No fucking way am I accepting guard duty for some spoiled-rotten royal brat and Kynan’s just going to have to accept it.

Kynan McGrath, owner of Jameson Force Security—perhaps the most elite private forces firm in the world—smirks at me. “Sorry, Jackson. I want you on this assignment.”

“To babysit a fucking princess,” I snarl as I slouch down almost petulantly in the chair across from his desk.

“It’s far more than a babysitting job,” Kynan replies blandly. “And you well know it.”

I don’t reply because I can’t really argue with it. Among other things, such as performing hostage rescues and working with foreign governments on black op missions, Jameson does routine protection and security services.

Except protecting a princess isn’t what I would call routine. Our company has been hired to provide security for members of Congress and Hollywood stars, but being asked to look after a royal is a first.

“I don’t get why you’re so averse to this job,” Kynan says, my lack of response prompting him to dig. “You’ve protected people before. You know it’s part of the job here and never complained.”

“She’ll be a spoiled brat, and it will be a miserable two weeks,” I grumble.

“And you know this how?” he challenges.

But that’s not the primary reason I don’t want this job. I get that not all our missions can be high adrenaline, dangerous, and pivotal to someone’s life or death. This isn’t the SEALs, and I’ve accepted that. I’ve had to ensure that my dad accepts it as well.

I’m third-generation navy, following in my grandfather’s and father’s footsteps. When I made the decision not to make it my forever career the way they did, well… that was almost unforgivable in my dad’s eyes, and he assured me my grandfather was rolling over in his grave. Our relationship has been strained ever since, and what’s worse is that my brother—who is still active-duty navy, intent on making it his career—has enjoyed becoming the favored son, lording it over me any time he can.

The only saving grace has been that Jameson is highly respected and called upon for help by the most important people in the world. Hell, the president himself hired us to protect his niece, and don’t think I haven’t thrown that in my dad’s face every time he lambastes me for leaving the navy for that “private, sissy security job.”

Christ, my family is complicated, and I shouldn’t care what my dad thinks of my life choices, but I went into the navy because I respected our family’s tradition. I wasn’t forced to do it. I wanted to do it. I wanted the Gale family honor to carry on by serving and protecting our country.

And I loved every damn minute of it.

It’s just… I didn’t love it enough to commit to it for twenty or thirty years. I wanted more freedom in my choices—I wanted a life, and let’s face it, I wanted better job security. Jameson pays a premium for the work we do, and my retirement potential is far greater.

“Jackson,” Kynan says, and my eyes slide over to meet his. I hadn’t realized my gaze had drifted and become fuzzy in my deep family thoughts. “You said the princess would be spoiled and you’d be miserable in the job.”

I shake my head, holding up a hand to stop the questioning. “Just forget it, boss. I’ve got this and can handle it. Two weeks is nothing.”

“Actually, it’s going to be three weeks,” Kynan says without an ounce of apology in his tone.

My eyes bulge slightly, and I swallow my ire. “But that means I’ll miss the training in Santiago.”

“There will be other training opportunities,” Kynan says dismissively. This isn’t open for debate.

I hold back a bitter reply. I was looking forward to practicing high-speed vehicular evasion tactics, an entire course built around how to outrun someone when being chased in a car.