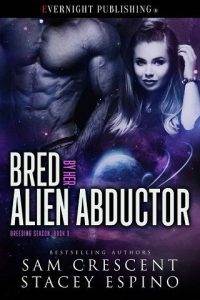 The blue planet filled Dhiro’s viewscreen as he prepared his ship to enter the atmosphere. He’d been dealing with numerous technical problems the past few hours, so it was a relief to finally reach his destination. It had been an excruciatingly long, mind-numbing trip through space. But it would all be worth it once he found a breeding vessel to carry on his lineage. An heir was all that mattered.

His two brothers said he’d never make it—it was too far, too dangerous, and the Earthlings may not even be compatible with their DNA. But Dhiro had done his research, and the Earth females were the perfect match. Although primitive in comparison, they were physically compatible, and he should be able to walk among them without detection.

With the repairs he had to complete on his ship before returning home to Trenu Zel, he hoped finding a suitable female would be quick and painless.

As he navigated the rough entry, his mother appeared on his monitor. She always chose the worst moments to make her appearance. “Yes, Mother?”

“Have you arrived safely?”

“Please be careful,” she said. “I want you to return home safely, with or without a mate.”

He held his breath for a moment, then responded, “I’ll check in with updates. Take care of my brothers.” Dhiro turned off the monitor.

He’d come to Earth out of duty, a responsibility to keep their lineage alive. In all his planning, he’d failed to think of his Earthling conquest as a future mate, but he supposed that was exactly what she would be. He’d never allowed his mind to wander into territories of love and bonding. If she were a Trenuian female, their match would be blessed by their people. Dhiro was entering uncharted territory and would be the first to claim an Earthling. Some of the males on his taskforce laughed at the thought of him mating with a primitive species. He’d been the butt of jokes for months.

However, they wouldn’t mock him once he returned with the only fertile female on his planet. At least that was his plan.

Within seconds, the ship made contact with the ground, skidding and jumping as it created a great plume of dust. His body jostled in his seat, and anything not bolted down was tossed around the ship’s interior. When he finally came to a complete stop, he didn’t dare move. As the minutes passed, he finally took a breath and unfastened his protective belts.

He turned on the viewscreen. His ship had indeed landed on the Earth’s surface, but it was barren, no sign of humans or their civilizations. Just dirt, dirt the color of rust for miles.

No matter. He’d come here for a purpose and had no plans in calling it quits.

Dhiro tested the outside air before opening the outer hatch. He stood on the top step, taking a cautious first breath of Earth’s air. It wasn’t as fragrant as the air back home, but it was breathable.

The temperature was much warmer here, the intensity of the sun something he wasn’t accustomed to. His steps echoed on the metal stairs as he descended. There was nothing here, and since his ship would be out of commission until he dealt with repairs, moving to a more populated area wasn’t an option.

He put his hand over his eyes to scan the distant mountains. The sky was a unique shade of blue. The planet had its charm, but he was still glad this voyage was temporary.

Dhiro unfastened one of the outside panels to begin working on the ship’s exterior circuits. He’d start his search for a mate tomorrow after he rested for the night. One by one, he tested for faults in the equipment. It was a mindless task, the hours slipping by without notice. The sky began to darken as he completed his first of many tasks.

A distant scream immediately captured his full attention. He set down his tools and took several steps into the open to get a better view of the land.

There was nothing to see. Nothingness in every direction.

Again, the scream echoed along the mountains ridge and valleys. He decided to investigate. After strapping on his weaponry and protective vest, he began his trek along the vast, red land. The sun had slipped below the horizon, but his vision was equally effective in the darkness.

He’d traveled far, and the lingering heat was becoming an increasing annoyance. The cries grew louder as he walked, so he had to be very close. Animals growled nearby, and he wasn’t sure what creatures he may find in this region. From his research, nothing on Earth could be a threat to him, so he plodded onward.

As he turned the corner of a low mountain, there was a small chasm with scant greenery. Plumes of smoke from a recently doused fire drifted up into the sky. And five feral beasts were closing in on a lone human. A female.