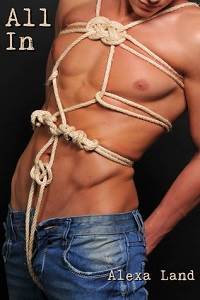 “Dude, if you keep staring at the boss like that, you’re going to get fired. That is, if you’re lucky.”

I glanced at Cole and asked, “And if I’m not lucky?”

“Then his mafia husband is going to put a bullet in your brain and toss your body in a dumpster,” my coworker said as he stuffed a backpack in his locker.

“His husband isn’t in the mafia anymore. And besides, he was never that kind of gangster,” I pointed out as I snuck another look at Jamie, my ex-boyfriend. He and his new husband Dmitri were deep in conversation in Jamie’s office, arms around each other, foreheads touching. It was painful as hell to watch. And yet, my gaze kept drifting to them.

“So, you think you retire from the mob and suddenly forget how to off the competition?”

I sighed and turned my back to the office, peeling off my grey t-shirt. “I’m hardly the competition.”

“You and Jamie were together for eight years, right? And you just broke up six months ago. You really think his husband isn’t threatened by that kind of history? Or by a guy that looks like you do?”

“I really don’t think a man as good-looking as Dmitri would find anything whatsoever threatening about me.”

Cole made a show of running his gaze slowly down my bare torso. And then he said sarcastically, “Oh yeah, who’d feel threatened by a six-two jock with abs you could chip a tooth on?” He slapped my stomach playfully, and I rolled my eyes. “Look Charlie, just play it cool around those two, ok? I like working with you, and it’d suck if you got yourself fired. Or dead.”

My coworker grinned at me, his brown eyes sparkling behind his glasses as he tied an apron around his hips. “Good. Now hurry up, beefcake. The bar opens in ten minutes,” he said as he left the employee dressing room.

And just because I was an idiot, I snuck another look at Jamie and Dmitri over my shoulder. They were kissing now, deeply, tenderly. It made my heart ache. Especially because it reminded me of the way they’d kissed each other when they’d gotten married just a few weeks ago.

The wedding had been on the beach at sunset. Jamie was a life-long surfer and the ocean was a part of him, so the location was perfect. They’d said they wanted to keep it small and simple, but there’d still been about a hundred guests witnessing the joyous union (for those two, that was actually just immediate family and closest friends). The ceremony was beautiful and romantic. And I must have been out of my mind for attending.

I pulled on my dark green work t-shirt and tucked it into my Levis. The name of the bar was emblazoned in white letters across my chest. It said Nolan’s. That was such rich irony. I had, in fact, at one time belonged to Jamie Nolan. But then I’d gotten scared and run from the relationship. It was the biggest mistake of my life.

And now every day, I came to work in my ex’s bar and wore this shirt with his name on it. Every day I got to feel the full impact of my loss, over and over and over again. And every day I got to remind myself that this pain was totally self-inflicted. I broke up with him because I was too scared to accept my sexuality, to come out to my family and friends, to admit to myself just how much Jamie meant to me, until it was too late. I would never again, despite the declaration on my shirt, be Jamie Nolan’s.

I tied my black apron around my hips and took a look in the mirror beside the lockers. After a quick finger-comb of my short, dark brown hair and a frown at the bloodshot condition of my green eyes, I went out to the dining room. Cole was topping off the salt shakers, and as I got busy doing the same thing with the pepper, he asked, “So, speaking of gangsters, are you still planning to go out with that Sicilian stereotype?”

On impulse, I’d accepted a date last week with a guy I’d met here in the bar. His name was Dante Dombruso, and I actually didn’t realize until sometime later that he was some sort of mafia heavy hitter. Ok, I didn’t so much realize it as have it yelled in my face by a panicked Jamie when I’d mentioned I was going out with Dante. Totally hypocritical, if you ask me. His husband had only recently broken away from the Russian mafia, after all.

“I don’t know what’s going on with that. He’s cancelled on me twice, both times on short notice,” I told Cole.