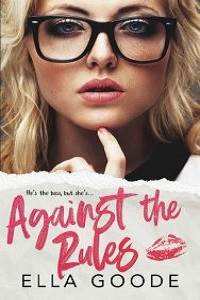 “I am not in the market for a woman,” I tell myself. This is a business dinner with the chairman of the O’Hare Foundation Trust, and we are here to talk about serious things such as this year’s recipients of the grant. But as Rydell drones on about this cause and that, I can’t take my eyes off a stunning brunette leaning against the balcony railing, a wine glass in her hand, staring moodily into the ocean.

She doesn’t look like she belongs at Hastings, a restaurant so exclusive that there’s no signage outside. You either know where the place is or you don’t get in. Every other person is decked out in designer gear, and not the kind you can buy in the department store but the custom made things that go straight from the runway into some celebrity or socialite’s closet. She’s wearing a plain black skirt and a black lace top that’s fraying around the edges. The heels of her shoes have little gouges in the leather and some of the gold plating on the links of the chain purse dangling off her shoulder has worn away. Also, she’s rounder than most of the women here who abide by the theorem that you cannot be too rich or too thin. A clothes hanger she is not and I like that look—a lot.

“I also think that the dog fighting circuit should be given five million,” Rydell says.

“Sure,” I reply absently. Her curves are part of her sex appeal, which she has in buckets. In fact, if I could bottle that up, I’d be able to sell it for millions. Her ass is the perfect size and shape for my palms. I wonder how hard the blow would be if I went over and cupped her ass. Any blow might be worth it. “Draw up the papers, Rydell. I’ll sign them tomorrow. By the way, I guess I have a new assistant. Name is Lucia Sanchez. Leave the papers with her.”

I reach over to the table next to me and grab their bottle of red wine.

“What the hell?” squawks the man. “That’s our Screaming Eagle Cab.”

“Sounds delicious.” I reach inside and pull out my wallet. “Reimburse yourself.”

“Give me that.” Rydell snatches the wallet away. “How much is the wine?”

I leave the financial advisor to work out the gritty details while I make the acquaintance of my future wife. I might not be in the market but the only way you get wealthy in this world is taking risks when others won’t.

Halfway to my destination, a familiar figure steps in front of me.

“Finn, my goodness, it’s been a while.” A scarlet finger flicks my tie and then scrapes down the center of my chest.

“I saw you yesterday on a billboard in LA.” Almost all of her. She’s more covered up tonight than she was in the ad. Talia’s the latest model for a famous jeans company. In the ad, she was sprawled across a dude’s lap, nude except for a couple of triangles of cloth over her breasts. The male model’s hand was across her crotch. I couldn’t figure out if she was selling jeans or something else.

“That’s not what I mean and you know it.” She moves in closer. “I’m free this week. Maybe we can get together.”

“I have commitments.” My girl turns away from the ocean and scans the crowd, her gaze falling on Talia and me.

“But, Finn, I’m not always available.” She flicks her hair over one shoulder and then draws a hand down her chest in what I think is supposed to be an erotic move. Talia’s the daughter of my mom’s best friend, so I can’t exactly tell the woman to move because she’ll rat me out and then I’ll have to listen to a lecture by my mom about how I need to be more open to relationships and shit like that. But maybe this time I’ll be in one and I can finally fulfill my mother’s wish to be a grandmother.

“Talia, you’re a nice girl, but it’s never going to work out between us. I’m not interested.”

Her face screws up. “Your dick must be dead then because there isn’t a man alive that wouldn’t want me.”

I don’t really care what Talia thinks of my dick. “Sure. Go with that.”

“I mean, yesterday, I had two actors blowing up my phone. They were practically fighting to see who could take me out.”

My girl starts to move toward the exit.

“You should definitely pick one of them. Take them out and I’ll pay for your date.” I jerk my thumb over my shoulder. “Rydell is over there. Just tell him how much you want and he’ll write you a check.”

I take off. Behind me, I hear Talia yell, “you can’t buy me! I’m too expensive for you.”

Heads turn in my direction, but I don’t have the attention of the one I want. She moves swiftly, dropping her glass off at an empty table before stopping in front of the elevators. A waiter bends over in front of me and I have to move him. On the way to the exit, I grab two wine glasses off another table, ignoring the angry exclamations and reach the elevator right before the doors slide open.