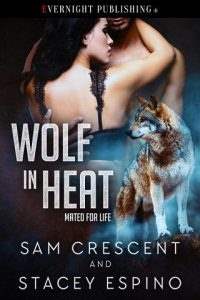 Heather hated the coming of the full moon—that glow on her skin and the different sensations wreaking havoc in her body. Her wolf lurked right under the surface, and it was when she felt the loss of her family the most. Caleb and Bethany’s pack were wonderful. They were her new family, but it hadn’t been that long ago when she’d lost her own. Their loss was still too fresh and raw to truly move on.

Some nights she found herself lying awake at night, shaking, sweaty, terrified. The memory of her father’s cries filling the air would stay with her forever. Haunt her. He’d been such a strong man but even he hadn’t been able to combat the rogue bear that had set about a path of destruction. Wrapping her arms around her body, she tried to ward off the cold.

At the peak of the full moon, they’d all be out in their second form, running, hunting. Her veganism still continued during the hunt. While the rest of the pack hunted rabbits, deer, or whatever animal they could catch, she’d often spend her time running. Stretching out her body so when the moon was gone, she didn’t have to worry about her beast coming to the surface.

“You’re out here all alone again,” Mika said. Her sister came and stood beside her.

“What’s wrong with being out here?”

“Why are you and David avoiding each other?”

“I don’t know what you mean.” The moment she’d met David, she’d felt this spark, this connection. She wasn’t entirely sure what it was, and anything new in her life tended to freak her out. She struggled with adapting, especially in the ever-changing human world. Where her sister had been able to look at change and make it her bitch, she couldn’t do it. Panic attacks, fits of rage, and sometimes standing still, unable to breathe were the ways she’d coped. It had gotten so bad when her parents had enrolled her in public school, they had no choice but to remove her. They said she was more feral than human, a curse in their day and age. Adaption was key and she didn’t blend in well.

It was why she tried to live her life finding balance in order to accept change. She couldn’t go to high school, but she’d been able to venture into shops or malls for a short time. Not long, a couple of minutes, and then she’d leave. Baby steps.

Her parents had been helping her to adapt, only for them to be killed during this process. She was thankful her uncle and her sister knew how bad she suffered with change and had helped her to avoid it every step of the way. Only there had been many new changes recently. Not all of them good. New pack, check. New people, check. New place to live, check. New sets of rules, check. All of it new. It was why she couldn’t sleep. Why the full moon terrified her.

The new pack was aware of her being a vegan and when that had made the rounds one night at dinner, the questions they’d bombarded her with had nearly overwhelmed her. If it hadn’t been for her sister and uncle, she’d have run and never come back. But running away only offered its own set of problems.

“Of course, you don’t know what I mean. We’ve all been avoiding the topic of you possibly being David’s mate. It’s starting to get old, Heather.”

“I’m not his mate. There. Does that make you feel better?” Even as she spoke the words, she felt they were a lie. Her mother had once told her when she found the one, she’d know. There would be no room for second-guessing.

If she was honest with herself, she knew damn well he was the one—her fated mate.

The permanence, the surety of that fact, suffocated her. It would be yet another change in a long list, and she didn’t want to deal with that right now.

David was sweet, kind, and strong. He had this … thing where he liked to watch her, which freaked her out. She wasn’t used to being the center of attention.

Her sister frowned and wrapped her arms around her. “It’s okay. It’s not that warm.”

Heather smiled. “You’re as worried as I am. When a wolf starts to feel the cold and the moon scares the living crap out of her, it means she’s rejecting her pack, doesn’t it?”

“No. Of course it doesn’t just mean that,” Mika said. “It could mean anything. Why haven’t you told Uncle this?”

“I don’t want to worry him. He’s been so focused on making this work. He’ll feel obligated to leave or I’ll end up pushing him into a decision to kick me out. I’m fine.” The truth was she wasn’t fine. With everything happening around her, she didn’t want to be without a pack. It was a miracle they’d been accepted into a new pack at all.