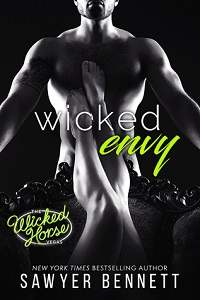 “I wonder how he does it,” Andrew says as we watch Dane make his way through the crowded bar toward us.

“You mean manage to attract every female within a fifty-mile radius?” I ask.

Andrew snickers before draining the last of the beer in his mug. When he sets it back on the scarred tabletop, he gives me a pointed look. “It’s that weird facial hair thing he has going on. Chicks love that for some reason.”

I laugh and look at Dane again. He is without a doubt the best-looking man I’ve ever known. Tall, built, and every college girl’s dream. He wears his dark hair a little short on the side, a little long on top, and has that weird but very cool goatee/soul patch thing going on that’s really hot. But if I’m honest, that’s not really what attracts the women. I know Dane Hawthorne better than any female who’s vying for his attention right now. He’s got a razor-sharp wit and a near genius-level IQ that makes him infinitely more attractive than just the face and body that God gave him. When you look into his eyes, you can see that he’s a man who is going to be at the top of his game—whatever game he eventually chooses to play in his life.

Of course, the rumor is that he is crazy wicked good in bed and he’s hung like a racehorse. I wouldn’t know even though he’s one of my closest friends. We’ve never gone there, and that’s totally for the best. Would ruin the friendship, you know.

Andrew is my other closest friend. It’s been that way since our freshman year at Berkeley. Dane, Avril, and Andrew—the Three Musketeers.

Dane shoulders his way through a throng of starry-eyed women, easily carrying three draft beers in his large hands. He sets them down on the table and takes the stool he had vacated not ten minutes ago to go buy the next round. Even though we’re all juniors, Dane is two years older than me and Andrew because he didn’t start college right out of high school. Rather, he spent two years traveling across the United States and Europe, living out of a tent or in cheap hostels so he could experience all the things in life that were out of his imaginable reach because of the way he grew up in the foster-care system. He financed the trip by saving every dime he’d ever earned by working part-time after school, and that was probably an indication of how determined he could be.

Not only does that mean Dane is of legal age and can buy alcohol for us, but it means he is infinitely more mature and worldly than Andrew and me. It still amazes me sometimes that Dane seems to derive some type of pleasure from being such close friends with us two geeks, but I’m very secure in his friendship with us.

“Three fresh beers for my best friends in the entire world,” Dane says with a grin as he grabs the mug closest to him. He holds it up in a toast to us, and I can tell by the sparkle in his eyes that he’s well and truly on his way to getting drunk.

So am I for that matter. It’s how we blow off steam at the end of a week of hardcore studying.

“Cheers,” Andrew says, and I follow suit and pick up my beer so we can all tap our mugs together in the center of the table.

“Any idea which woman you’re going to take home tonight?” Andrew asks Dane before taking a large slug of his beer.

Dane turns and lets his eyes scan around the crowded bar. He looks bored and un-enthused, but Andrew and I both know he’ll bring home one of the women in here. In addition to being best friends, the three of us are roommates, and we are well accustomed to hearing screams of pleasure coming from Dane’s bedroom several times a week. It used to embarrass me, coming from a pretty conservative mid-West upbringing, but now I just ignore it.

To my surprise, Dane shrugs and turns to look at Andrew. “I don’t know. They’re all starting to look the same to me.”

I snort, and then start laughing. “Dane Hawthorne… you are so full of bullshit. As long as girls are pretty and don’t talk too much, they are more than intriguing to you.”

Dane actually looks offended. “You make it sound like I’m not very discerning.”

Andrew and I cock identical eyebrows at our friend.

“What?” Dane grouses as his gaze flicks between the two of us.

A grin breaks out on Andrew’s face as he puts his forearms on the table and leans toward Dane. “Listen, you are one of the most brilliant people I know. But you are also kind of a whore, dude. It’s okay, though. Avril and I still love you.”