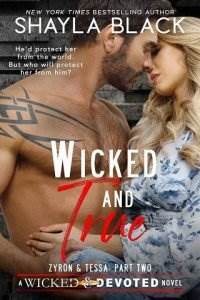 Chase “Zyron” Garrett sat back in his chair in the suddenly too-small conference room and stared at the trio of bosses glaring at him. He wished the BS Hunter, Logan, and Joaquin had just spewed was a punch line, but EM Security Management had a mole, and they very clearly weren’t joking.

It’s either your bestie or your girl.

You’ve got two weeks to figure out which one of them is guilty or we’re letting both go.

Bastards. Neither Trees nor Tessa was guilty of a fucking thing. Zy ought to know; he’d already spent three months nosing into his best friend’s life. He’d come up with zero dirt, proving Trees as innocent as Zy always suspected.

Now they wanted him to seduce Tessa Lawrence, their office assistant, to discern if she was guilty of selling them out. If he didn’t, they would fire her, despite the fact she was a single mom who needed her job.

You’ve got two weeks—max. If you fail, we’ll do the same to your fucking ass, too. Now get busy and get it done.

Calling them bastards was too polite. They were assholes.

Zy clenched his jaw and stood. How was he supposed to do what they’d demanded? He loved Tessa. He’d told her as much on Christmas Eve. Her response had been to run away, sure, but he was ninety-nine percent positive she’d left because she loved him, too…but thought their situation was hopeless. After all, they’d never dated or hooked up. Hell, they’d never even kissed because, for the last ten months, a single sticky paragraph in their employment contracts had kept them apart.

As of five minutes ago, it was gone.

I’m going to take her aside this morning and present her with a new contract. Better sick pay and vacation, tighter nondisclosure…and no nonfraternization clause. She’ll sign. Then you’ll both be off the hook.

Son of a bitch. Zy had waited and wanted Tessa, ached and burned for her. He’d been hoping that somehow, someday they could be more than co-workers and friends, but he’d never imagined that he’d be strong-armed into getting her between the sheets to spy on her. He didn’t have to fuck Tessa to know that selling the bosses out was something she’d never do. But he didn’t have a choice. Since they’d already coerced him into snooping on Trees, Zy figured he’d repeat the process…just with hot, bust-up-the-bed sex.

But one way or another, he would prove to the Three Stooges that they could one-hundred-percent trust Tessa.

“Get a move on,” Logan, the youngest of his bosses, insisted.

But Zy kept his mouth shut and gave them all a tight smile as he headed for the door.

As he approached, it crashed open. Caleb Edgington, the team’s previous commander, charged in looking shell-shocked, like he’d collided with panic and run face-first into death.

Hunter and Logan both stood. The quietest of his bosses, Joaquin, rose with a frown.

The older man swallowed. “Your sister…”

“I received a threat recently. It wasn’t specific, just a tube of lipstick and a warning to hand over Valeria Montilla before they took whoever the tube belonged to. I didn’t know who—” Emotion choked off the colonel’s words. He pressed his fist to his lips, grasping for the fortitude to finish delivering the bad news.

Another guy came in behind the colonel—big, blond, badass, and totally pissed off. Deke Trenton, Kimber’s husband. “She’s gone. She dropped the kids off at daycare, then made a trip to the grocery store…and didn’t come home. A courier delivered this thirty minutes ago.”

They all crowded around as he whipped out a picture of Kimber, her auburn hair tangled, her big eyes red rimmed, with a gag over her mouth, her hands tied behind her back, and a gun to her head.

“We’ll get her back.” Despite his face going pale, Hunter sounded resolute. “We’ll do whatever it takes—”

“You’re fucking right we will,” Deke spat. “I want my kitten back. Jack and the rest of the Oracle team are at our office strategizing. Any help you can spare…”

“You’ll have it,” Hunter promised. “We need to lock down the rest of the wives and kids.”

“Fast,” the colonel managed. “Before it’s too late.”

The older man ducked out, looking as if he could barely keep himself together.

Deke didn’t look much calmer. “Thanks for whatever you can do.”

“Fuck that, she’s our sister. We’ll devote day and night to saving her.”

Kimber’s husband nodded, then he was gone, too. Silence prevailed for a protracted moment before Hunter swallowed, collecting himself. He turned to ice in an instant. Logan lived up to his fiery temper, grabbing an eraser from the nearest whiteboard then throwing it violently. His empty coffee mug followed, shattering against the wall.