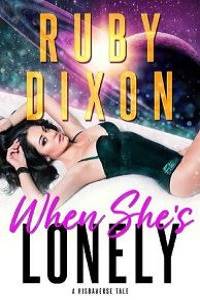 I inwardly cringe as the very nice alien explains to me for the fourth time how to use the meat-stock machine in the barn. She waves the little tube in the air, gesturing, and I nod and nod and nod, all the while feeling like a failure.

"You get it now?" the froglike female says. "Yes?"

"Yes," I say enthusiastically, though I do not get it. I do not get it at all. But she's already explained it to me four times and it's not her fault that I can't understand her. It's mine. "Thank you."

Obvious relief shows on her face, and that just makes me feel worse. She throws her hands up and continues rambling, moving through the empty barn and gesturing at things. She's got her back turned to me and so I can't make out a single thing she's saying, her voice that much more muffled than before.

God, I miss my hearing aids.

Don't get me wrong. I hated those little bastards. I hated how they made the insides of my ears itch and that if I touched my ear or went outside, I'd get tons of static. But without them, I'm lost. Everyone here on Risda speaks in thickly accented English, and their mouths aren't even human so reading lips is a waste. I can hear them talking. I can hear the inflections in their voices. I just can't make out what they're saying half the time.

But I've been told that a flawed slave is a dead slave, so I don't say shit about my hearing problems, not even now.

The frog woman turns back to me. She told me her name, but it sounded like a mumble and I didn't catch it. She gestures at the barn, then at me and asks a question.

"Sorry, what?" I ask, leaning forward and putting on a friendly smile. Days like today, I really, really miss the hearing aids I had back on Earth. But they were stolen from me, just like the rest of my life. So I act dumb—friendly but dumb—to hide my hearing loss. “I wasn't paying attention."

She gives me an angry look and I mentally imagine her grabbing me by the neck and shaking me. "Any questions?" This she enunciates, and it's clear she's hit the end of her rope with me. "Want me to repeat?"

"I'm good," I say, snatching the tube of livestock whatever from her hand. "It's all very simple, right?"

"Yes, very simple," she echoes, nodding. She waves a hand and walks past me out of the barn, and her words turn into a low-pitched jumble that slip right out of my hearing again.

I've learned that it's better to pretend I understand and just figure it out later. If they're handing all this equipment out to everyone, surely I can figure it out myself. If not, maybe I can find a nice neighbor that will help me.

One that speaks loudly and doesn't have an accent. Normally the accent isn't much of a problem, but when I can only make out half of the inflections of the speaker, the accent just trips me up and my brain can't match up the pieces of words that I hear. So I just smile brightly and wait for her to leave.

I'll figure it all out on my own later. How hard can it be to run this farm equipment, right?

"Got a call for you, boss," one of the assistant custodians says. "Another barn incident."

I bite back a groan. "No. Seriously? What is it with these humans? Don't they know how to do anything?"

Sinath just shrugs. "Kef if I know. You know which human this is, though.” And he breaks into an evil little grin.

Kef. Why do I get stuck with all the dumb ones on this planet? "What about Ainar? Can't he go out and help?"

"And Rektar? Shouldn't he be in already?"

"He has the morning off. Taking Miss Lucy out on a date." He grins at me. "I'm afraid she's all yours."

I bite back a snarl of frustration. Most of the humans in this settlement don't bother me. This one does, though. She's loud and she's dumb, and she doesn't listen to a thing anyone says. We've been on calls out to her homestead twice already, only for her to shout at us and act like we're the problem. She's a cute little thing, but it doesn't make up for how obnoxious she is.

"Send someone else," I tell Paxon. "I'm busy." Busy doing anything but helping Colonist Ashley Wendell.

Paxon just smirks at me, the keffing shit. "I'm afraid she asked for you by name, Custodian i'Yani." He claps my shoulder appeasingly. "But don't worry. I'm told she already put the fire out."

"Fire?" I groan, running a hand down my face. A fire and Ashley Wendell asked for me. This has to be a joke. Please let it be a joke. The last time I was at Colonist Wendell's farm, we got into a shouting fight. Why in all of Homeworld would she ask for me to come back when there are plenty of other custodial officers that would assist her?