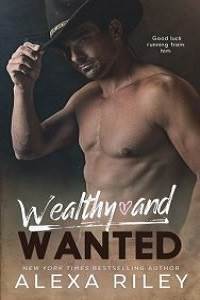 “Dots! It’s going to be the worst without you.” Kat throws herself across my bed in a dramatic huff, making all the wild curls in her hair bounce everywhere until she blows one out of her face.

My baby sister Kat and I look completely different but yet similar. My hair is straight and icy blond, where hers is wild dark. I’m only five six, but next to her five one, it’s a big difference.

At a glance we look nothing alike, but our features are all the same. Our noses turn up a little at the end, and we each have a dimple on our left cheek. We’ve even got the same eyes.

“I’ll be back,” I remind her. I made a promise, and it’s one I have to fulfill if I want to save everything my family has worked for. According to my mom, I’m also doing my part to save the family name.

I guess “saving” is a whole lot better of a word than “selling.” In reality, that is what’s happening. It’s all on my shoulders to save this failing farm, and I feel like a piece of me is failing with it. I’m not dying or anything, but I think my heart will die the day I have to marry Judge.

Kat reaches out and touches the gaudy engagement ring that I hate. I want to roll my eyes every time I look at it because the man I’m supposed to marry didn't even put it there himself. He gave it to my father and told him the date I’m supposed to show up to marry him. Isn't that the most romantic thing you’ve ever heard?

“I don’t understand why you aren't excited to marry Judge. He’s so—”

I’ve seen Judge a handful of times over the years. I have no idea why he would agree to a marriage with me. I’m not sure we’ve ever actually spoken a word to one another. We've been around each other while talking to other people, but he never once made me think he has an interest in me. Which makes me wonder why he jumped all over the idea of marriage when my father offered it like the good old days and selling off your daughter was normal.

“Dreamy.” She lets out a long sigh as her hand drops away from the ring on my finger. I stare at my sister, who looks like she’s lost in a fairy tale. Kat has been boy crazy her whole life. I always thought she would be the first of the two of us to marry even though we’re only eleven months apart.

“Dreamy?” I pick up my pillow and hit her with it. “You need to stop reading all those romance books.”

“I will, right after you.” She lifts a brow at me.

“Hey, I’m not the one calling Judge dreamy.”

I let out a small laugh as I turn around and straighten stuff on my dresser because I don’t want her to see my real reaction. My throat goes tight because if Kat knew what was really happening, she’d lose her mind. She can be a bit dramatic.

“I know, that’s why I’m doing this,” I manage to get out. I take a slow breath, trying to mask my emotions, which is hard to do with her since she reads me well. “I don’t want to go from our parents’ home to my—” I can’t say the word. To call him my husband feels so wrong. “To Judge’s house.”

I might wear the ring, but I don’t want him. I’ve not been handed over to him yet, so I’m going to enjoy the little time I have left until then. I don't want to think about Judge at all until I’m out of time.

I peek over my shoulder at Kat and see it’s going to be hard being away from her. I know I’m not going to be able to leave if she has that look on her face, and I’m supposed to leave soon if I want to be on time. I’m guessing it’s not a great idea to be late on your first day of work, but my sister's happiness has always weighed on me.

“I got you something.” I pull open my top dresser drawer and grab the two cell phones. Kat jumps up onto her knees on the bed, and I turn around and hold one out for her. Her eyes widen, and I smile. “I figured since I got a job now I could use some of my savings.”

Kat and I have to be the oldest people in the world without cell phones. Our parents didn't think we needed them or the added expense, but I’m eighteen and I can do what I want. At least for now. Call it a small act of rebellion, but it’s probably the same as me taking this job. I agreed to get married. I didn't agree that they could control my every action until that day. I felt I’ve earned this, and honestly there isn't anything they can do to stop me.