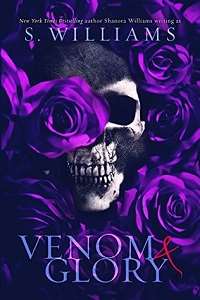 This was never supposed to happen.

I betrayed his trust, shattered his loyalty, and broke his already broken heart.

He was once the monster in the dark—the man who haunted my dreams and stole my happiness. He was once a man I loathed—someone I would never be able to forgive.

That’s what I thought.

But the man who was once a monster in the dark has become everything I’ve ever wanted. He has become the only ray of sunshine I have—my only hope. He is the one who restored me—the one who showed me what I am capable of, and who I really am.

He is the only reason I still wish to live.

Without him, I may as well be back in that shed again—chained. Broken. Beaten. Starved.

Without him, I may as well be dead.

I have been disappointed by a lot of people.

I have been fucked over and cheated. Beaten and disrespected. I have seen things—things that have haunted me, turning my dreams into vicious nightmares.

I have seen blood and gore. I have seen my own father cut off a man’s arm with a chainsaw in our cellar, and despite all the brutality I have witnessed, I have never wavered. Never flinched. Never cared about those people.

But this…this is something that I will not be able to accept.

I feel her looking at me.

I hear her sniffling.

I can’t even fucking look at her.

The van runs over a pothole, shifting me over, closer to her. She grabs my hand. I pull away.

“Shut up. No talking,” one of the putos in the front seat commands. I want to break his fucking neck for speaking that way to her—to me. He has a black handgun pointed at my face. If my head weren’t spinning so much, my fingers so numb, I would snatch it away and shove it down his goddamn throat.

I keep my eyes ahead, jaw flexing.

The van finally begins to slow down, and I look out the window. The church is a few yards away, my men already lined up, armed, and waiting. They lift their guns as soon as they see the van coming their direction, ready to fire if necessary.

The driver parks and the man in the passenger seat pushes his door open and steps out. With a smirk on his lips, he walks to the side of the van, pulling the back door open.

“Take your feisty little bitch, and get the fuck out of here,” he snarls at me when I step out.

I glare at him. Cold. Hard. His neck is right there. His throat. One grip and squeeze and I could end his fucking life.

His throat bobs when he notices I’m staring at it, a clear sign of fear, weakness. I hate weak motherfuckers that can’t back themselves up.

“Watch your fucking mouth before I punch you in it,” Patanza speaks from behind him, pointing a gun at the back of his head.

Several men in the trucks behind the van step closer, holding their guns high, aiming at us. I keep my eyes on the guard, el hijo de puta in front of me, and then I finally blink, lifting a hand in the air, a silent command for Patanza to stand down.

“Help her to the car,” I order. I don’t even recognize my own voice. The icy chill to it, the dry, gruff timbre.

Patanza hurries for Gianna, grabbing her elbow, nearly dragging her to the truck. When she’s secured, and the door is shut, I fix my eyes on the guard again, taking a step closer, eyeing him even harder now.

“You may feel proud now, about what you think you and your cunt boss have accomplished, but don’t you ever forget who the fuck I am.”

He steps away, trying to laugh it off, but I see the panic in his eyes. He watches his back as he climbs back into the van, ordering the driver to hurry up and go.

I watch every single vehicle leave. I know at least one of them will linger. One of them will pretend to go, but wait somewhere to try and follow me back to my mansion.

I’m not fucking having it, so I wait.

They continue down the road, a trail of dirt and dust curling behind them.

When I snap my fingers, boots instantly crunch on the ground. My gaze is still ahead, still watching the vans drive away.

Four loud whistles zip past my ears, shooting through the air like cannons.

It billows, the way my trucks did when they attacked me by the Blue Betrayals. It’s fierce and strong, like my anger in this very moment. The explosion makes the church bell ring, a small chime resonating deep in my bones.