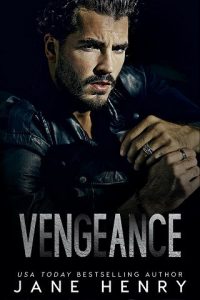 The driver pulls over by the side of the road. “Here you go. Pay on the app.”

I look at the GPS and note we’re still a mile away. We drove by the wooden placard that read Welcome to Salem, complete with the obligatory golden witch on a broom, half a mile ago.

The kid driving the car’s about twenty years old, clean-shaven, and he wears glasses perched on the end of his nose. He looks over the wire rims and frowns. “This is as far as I go, lady. Do you know who lives up that hill?”

“I do.” I barely control my temper. “It was the address I gave you when you agreed to drive me, remember?”

He blinks. “I didn’t recognize the address. Would’ve turned down the job if I had.”

Lovely. Does everyone know the man I’m going to see, and I’ve somehow lived in ignorance all this time until yesterday?

“I won’t go up there. I don’t have a death wish, lady. I won’t charge you for the rest of the trip, only this far,” he says, as if somehow that makes it all better.

“Fine.” I grab my bag, a beat up black leather crossbody I picked up at a thrift store, and sling it over my shoulder. I really should maybe find something a bit nicer for times such as these. “Thanks.”

I slam the door harder than I need to and frown at my choice of footwear. I have exactly one pair of heels in my closet, and it figures today’s the day I’d decide to wear them. I could call for another ride but that risks another rejection, and the truth is, I don’t have time. I’ve got to be at work in two hours, and I have no idea how long this—interview?—will take.

So, I do what I must. I take a deep breath and begin walking toward the house.

I fume the whole way. If Mr. Master’s asshole employee hadn’t totaled my car, I wouldn’t be walking alone to the ridiculously huge mansion a mile away on the hill. I wouldn’t have this massive headache or bruises either.

I also never would’ve discovered Cain Master or have an excuse to visit him.

The summer heat’s cooler by the seaside, yet it’s still nearly eighty degrees with no breeze. I’ll show up sweaty and disheveled, no matter how slowly or carefully I walk.

My head hurts from the injuries of the night before, but I’m otherwise alright. I used a little bit of makeup to cover the bruises, and even ran a mascara brush through my lashes. But the makeup was old and dried up, and I’m afraid I look like a little kid playing with her mom’s lipstick.

Normally, I prefer to mask my eyes—they’re a vivid violet that unfortunately is hard to hide—but today I decided it couldn’t hurt to accent them a little. Or… whatever. I don’t know what else people who know about these things would call it. Shades of purple make my eyes stand out.

The dress I chose is one of the few I own. A pale lavender number in a cotton blend, it dips in the front while still being professional, the hem hitting mid-thigh. Combined with a nude pair of pumps, the dress is professional and simple, suitable for a job like today.

It’s odd that while I was able to find out Cain Master’s history, including the cases brought and accusations made against him, I wasn’t able to find a birth date or a single picture anywhere. It’s disconcerting, honestly.

Cain Master is insignificant in the eyes of the American public… but it’s a lie.

A part of me wonders if hiding damn near everything about him online was intentional. Or did he have an identity before this one? Another name? Is this one given to him by the government, or one he chose for anonymity?

I bet he isn’t as quick as he once was, his wits dulled over the years. He’s wealthy enough, that I know from just a cursory glance at his home. But does he even own that? I spent my time researching his history and background and haven’t looked into his personal assets.

He has no family to speak of, not even so much as an ex-wife.

I know enough. Sometimes it’s better not to know more than what’s directly in front of you.

I twist my foot on a rock and stumble but throw my arms out wide and catch myself before I fall. If I hurt myself now, I’ll have to head home and cancel this mission altogether.

I carefully take off my heels and begin to walk along the side of the road. It’s cooler here, under the shadows of the large, stately maples that offer shade and shelter. I’m physically fit, but panting from the heat. I blame last night’s accident.