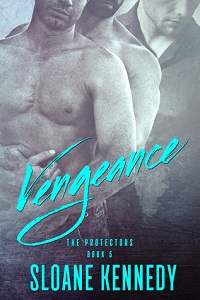 the desire for revenge.

I hadn’t expected to find him alone, especially considering the seemingly enormous family he had. But the combination of the late hour and the fact that doctors had assured his older brother and the man’s husband that the young man would make a complete recovery, had probably played a role in the fact that no one lingered around his hospital bed or was trying to awkwardly sleep in one of the small guest chairs in the room. The floor was also quiet and the two nurses sitting at the nurses’ station only paused briefly in their conversation to give me a polite nod. Even though it was well after visiting hours, I had no doubt that the young man’s powerful family meant that not all the rules necessarily applied to him or to the family of which he was a part. And the nurses likely thought I was a member of that family.

Family was a luxury I’d lost a long time ago. And I had no desire to get it back.

The room was dim, but there was a little bit of light above the bed, presumably so the nurses could do their work without having to turn on the overhead lights and wake their patient.

As I moved closer to the bed, I felt the knot of anxiety in my belly ease as I watched his relaxed breathing.

So different to what it had been less than twenty-four hours ago.

I’d seen the young man before I’d met him yesterday, but I’d been limited to marveling over his beautiful features with just a couple of photographs as I’d done my recon on the Barretti family. And even though he wasn’t technically a Barretti, he’d been included in my research because of his close association with the subject of our case, Eli Galvez.

Eli had become the lover of one of my team members, and I and the rest of the team had been charged with trying to figure out if Eli was in danger after he’d been physically assaulted by his stepfather, as well as experiencing a random break-in attempt at his apartment a few days later that we hadn’t been sure had been all that random. And while I’d only come to Seattle to meet with our vigilante group’s founder, Ronan Grisham, about taking over the day-to-day duties of running the team so he could focus on returning to a career in medicine, I’d had no issue with helping to figure out if Eli was truly in danger or not.

Which was how I’d crossed paths with the young man in the hospital bed.

His name was Brennan.

Even though I’d been mesmerized by Brennan’s stark beauty from the moment I’d laid eyes on his picture, I hadn’t made any plans to interact with him despite my intense longing to hear what his voice sounded like, to feel his touch, to tease his perfect lips and drink down his sweet taste. No, I had more self-control than that. There were plenty of hot guys around for the quick fuck I occasionally needed…some were even worth a second one. But I had no need to seek them out. They came to me.

Perhaps that made me an arrogant son of a bitch, but facts were facts. I never lacked for male company if I wanted it.

I just rarely wanted it.

I’d just pulled my car to a stop outside Eli’s apartment the day before when I’d seen the young man who’d haunted my dreams the previous night getting out of a vintage Mustang that had appeared to be in the process of being restored. Brennan had been behind the wheel of the sleek car and when he’d climbed out, I’d nearly swallowed my tongue at how even more stunning he was in real life than on film. He’d pulled a huge Rottweiler from the back seat of the car and I’d instantly suspected the animal belonged to Eli.

Brennan hadn’t noticed me sitting in my car as he’d crossed the street and walked to Eli’s apartment, which was near the back of a converted house and was accessed via a set of stairs alongside the house. The way Brennan had moved with easy grace and the slight smile on his face as he’d talked to the big dog had done something to me. I’d had no idea what, but whatever it was, I hadn’t been able to take my eyes off of him until he’d disappeared inside the apartment.

And then all hell had broken loose.

I’d been out of my car and running within a second of hearing the gunshot ring out and instead of feeling cool and calm like I usually did when I was headed directly into danger, all I’d felt was a stark fear that I’d be too late. The scene inside of the apartment when I’d gotten up the stairs had been chaotic and I’d registered several things all at once.