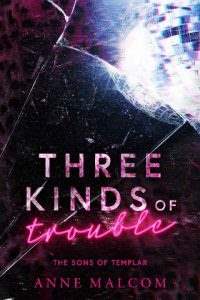 My father, when he was sober enough to remember who I was, would always say, “Freya, you were put on this earth to create three kinds of trouble. Trouble for your parents. Trouble for whoever is unlucky enough to fall in love with you, and most of all, trouble for yourself.”

Though he might not have been the wisest man, nor the kindest or the soberest, my father always spoke the truth.

I didn’t try to attract trouble. In fact, I actively avoided it. But somehow, it found me. Like it had tonight.

With the man bleeding in front of me. From a stab wound.

It wasn’t just any man bleeding from a stab wound, but one with a crapload of muscles and tattoos, wearing an unmistakable leather vest. They called it a cut, the bikers. The Sons of Templar.

After the night I’d had, after the life I’d had, I did not want to have to deal with a bleeding member of the Sons of Templar MC, but I couldn’t just leave him there bleeding, could I?

“Shit,” I muttered under my breath, rushing over to the man currently hemorrhaging in the middle of the desolate parking lot. The parking lot outside the club was thankfully well lit, because our boss was actually decent and didn’t want us feeling unsafe while walking to our cars. Usually, there was someone available to walk us to our cars. Usually I was lucky enough not to finish my shift while Dante was still on the clock. Dante… an apt name for him since I was pretty sure he was spawned in the fires of hell.

As much as I despised the man and actually felt safer walking to my car when he wasn’t around, I would’ve even taken Dante right then. He might’ve been a misogynistic, narcissistic asshole, but he had enough self-preservation to know you didn’t fuck with the Sons of Templar. Plus, he would’ve wanted to be in their good books, since I’d heard a rumor that he’d tried to prospect with them and didn’t make the cut. Apparently, he was desperate for their approval, for a second chance. Watching him try to act cool and badass in front of them whenever they came into the club was a huge cringe-fest. So if Dante was here, he would’ve dealt with this, most likely banishing me from the scene because according to him, women couldn’t possibly deal with this kind of thing. And he wouldn’t want anyone possibly taking away whatever glory would come from saving a member of the club.

But Dante wasn’t there.

No one was there.

Because I’d stayed at the club writing emails to friends all over the country, catching up on all the messages I’d mentally told myself to reply to later but then had forgotten all about. I’d also forgotten about the fact that Kallum was away, which meant he wouldn’t be there to stick around until everyone left, making sure every girl got home safely—which was a huge part of his job. I hadn’t been that worried about being there alone in the middle of the night. Our smallish town was pretty crime-free, thanks to the Sons of Templar. There had been some stuff that went down before I moved here, I’d heard about it in whispers. Apparently, almost the entire MC had been murdered by enemies. There had been some kind of war. It sounded intense and insane and completely fucking dangerous. I stayed away from all of that stuff.

“Holy shit,” I whispered, dropping my purse and kneeling beside the lifeless man on the ground. The glaring overhead light showed the rapidly growing pool of blood underneath him and that his white tee was stained in the middle of his torso. My hand went to his chest, laying it flat there, holding my breath as I waited for it to rise and fall to show me he was still alive.

“Okay, you’re okay,” I said to him, blinking rapidly in the low light. “I’m just going to…” What was I going to do right now? The parking lot was eerily quiet, the area surrounding the club pretty much abandoned with the closest house being at least a mile away. Kallum had chosen this location so he wouldn’t get any noise complaints or trouble from residents who didn’t want a strip club near them. A very smart business idea. Apparently, he hadn’t planned for someone being stabbed or shot in the parking lot needing immediate medical attention.

There was no one around. No one but me and the man who was quite possibly dying in front of me. It felt like we were the only people left on the planet. God was playing a cruel fucking joke by giving this guy me in his hour of need. I did not do well under pressure. My hands were already shaking, my dinner already threatening to come up, my heart roaring in my ears. Yes, a full-on panic attack was imminent.