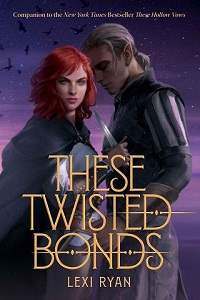 Beyond the castle gates, the sun rises and the birds sing, but the Golden Palace is draped in a veil of night. My night. My darkness. My power.

I throw out magic with abandon, trapping those who dare to chase me. Darkness trails behind me like the train on an elaborate wedding gown. But I’m not anyone’s bride.

I won’t let them fool me with their pretty lies and manipulations. Sebastian betrayed me. They all betrayed me, but his duplicity cuts the deepest. The male who was supposed to love me, supposed to protect me, used me to steal the Unseelie crown.

Rage floods my veins and feeds my power.

I run, even when the path beneath my bare feet turns rocky and sharp. I focus on the pain, welcome the sting of the gravel cutting into my soles. It’s the only thing that blocks out this other feeling—this anguish and frustration that belongs to the one I love. The male I’m bonded to forever. The one who lied to me, who betrayed me.

I don’t want to feel him. I don’t want to know that my departure is like a fracture down the center of his heart or that losing me has brought him to his knees. I don’t want to understand that he’s been trapped by his own duty or to comprehend the depths of his regrets. But I do. Through this bond between our souls, I do.

Sebastian betrayed me for the crown, and now he has what he wanted, while I have become that which I despised for so long. A faerie. An immortal.

Reason claws at me as I run.

I’m barefoot. In a sleeping gown. I won’t make it far like this, but I refuse to let them catch me.

I double back to the paddock, and when I push inside, the stable boy’s eyes go wide, his gaze fixed on the cresting wave of darkness looming behind me, ready to strike.

He’s young, with sandy blond hair, bright blue eyes, and pointed elven ears. I’ve seen him before, when getting a horse to ride around the palace grounds. Back when I thought I was safe here, when I believed Sebastian’s love was pure.

“Give me your boots,” I say, lifting my chin.

He keeps his wide, worried eyes on me as he unlaces them and tosses them at my feet.

“Now a horse,” I command, stepping into the boy’s shoes. They’re a little too big, but they’ll do. I tighten the laces and secure them around my ankles.

His gaze darts back toward the palace again, and I throw out another burst of power, making the night beyond pulse with malice. His hands shake as he guides a white mare from her stable. “Wh-what’s happening, m-m-milady?”

I ignore the question and nod to the dark belt of knives buckled at his waist. “Your baldrick too.”

He unlatches it, letting it drop to the stable floor. Moving quickly, I snatch it by the buckle and wrap it around my waist, tightening the clasp before swinging up onto the horse.

“Thank you,” I say, but the boy is cowering, as if he expects me to end him with his own knives. His fear leaves a sour taste in my mouth. Is this who I’ve become?

This is who Sebastian made me.

I can’t think about it as I nudge my horse out of the stables, righting myself on the saddle before I feel a tug at the center of my chest. A sweet ache that begs me to turn back to the palace. Back to Sebastian.

Shouts carry across the lawn. With my new fae ears, I can make out the sounds of the chaos in the castle—the scrambling, the shouting, the pounding of feet running my way.

The shouts grow closer. My magic has slipped; my darkness has loosened its grip.

I drive my heels into the sides of the horse. She takes off, galloping at full speed while I hold on as tightly as I can.

Come back. I don’t hear the words so much as feel them, feel the ache that burns my chest and settles into my bones. I need you. Come back to me.

The reminder of my connection with Sebastian makes me ride harder. I don’t know if I can escape it, if I can mute his misery and heartache with distance alone, but I plan to try.

“I need a room for the night,” I tell the barmaid behind the counter at a run-down inn. My voice sounds like crushed glass, and every muscle in my body screams with exhaustion.

I don’t know where I am or how far I’ve ridden. All I know is that I raced away from the palace as fast as I could. I rode hard, passing through villages and farmlands until I couldn’t keep myself in the saddle any longer.