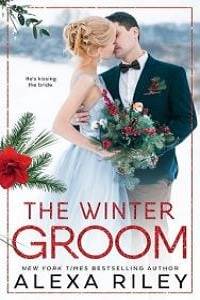 That’s what my mind screams as I stand at the bar waiting for the man that hired me for the night to come back and collect me. I’d been dismissed from the table before I could even get the meal I’d been promised. Everyone should get a last meal. I was hoping to get that before I tried to make some kind of escape, but it might not even be possible now. My eyes flick to the emergency exits around the restaurant to find the closest one.

My plan was to get Sherman Hawthorne drunk. He’s already downed three whiskeys but is still coherent. I was hoping whatever that white powder I’d found in my mom's nightstand drawer would help at some point. I was going to try and slip it into one of his drinks, but the two guards he had with him made it impossible.

One of them looms close to his table, their attention no longer on me right now. This is my chance. I could escape, but then where would I go? I don’t even have a dollar to my name. All I have is a fake ID that was thrust into my hand hours ago after they’d taken my real one.

How the hell did I get here? I thought I’d made all the right decisions in life. At least the best I could with what I had. Now I’m at some fancy restaurant being sold off for one night to some man that’s old enough to be my father. Hell, maybe even my grandfather. Not that I’ve ever met either of those men. It’s always been my mother and me, off and on over the years. Sometimes I’d get tossed into the system, but then she’d get clean, and they’d release me back to her. I’m not going back into the system now that I’m days away from turning eighteen. If I make it to that birthday.

“Can I get you something to drink?” the bartender asks, stealing my attention away from the table. “I’ll need an ID.” His eyes roam over my face before they trail down the front of the dress I was ordered to wear. I feel practically naked and exposed.

“No thank you.” I lick my lips, my attention going back to the table where the two men are still arguing. Sherman is clearly losing it over whatever the fight is about. The man in the fancy suit showed up pissed about something and is getting in Sherman’s face. My feet stay glued to the floor because I know there’s no running. I’d be found in no time.

I was so stupid. I knew better, and I never should have tried to steal from the Shapovals. In my defense, I had no idea they owned the little corner store. At the time I hadn’t been thinking about who owned the place. All I could think about was it had been five days since I’d seen my mother, and I was starving. Of course they own it. They own everything in the area of the city I live in.

I thought I’d gotten away with it too. They’d let me leave the store, walk all the way back home, and even eat a few bites of the premade sandwich before they came knocking. Then I couldn’t beg for forgiveness and give it back. Now they’re collecting. I have a feeling they’d been watching me long before I tried to steal from them. They knew too much not only about me but my mother too.

Another man joins Sherman’s table, and I watch as he nods in agreement with whatever the first guy said. Sherman shrinks down as they get in his face, and my fear starts to grow. Sherman is going to take his anger out on me when these men are done with him.

When I decide I have no option other than to run, Sherman beats me to it. He bolts toward the front of the restaurant and out the double doors. His men follow him, leaving me standing at the bar alone.

I could not be this lucky. Then again, I’m guessing Sherman isn’t going to pay whatever price it was to have me and my virginity. I don’t even know how much he was paying for it. I’ll likely be shoved on to the next man they put me with, or worse. I could be in trouble for not following through with it. That I didn’t somehow seal this deal or something.

After witnessing this, I know I have to get out of here. I take a step toward the sign that shows where the bathroom is because there’s no way I’m making my escape out the front. What if Shapoval’s men are out there? I freeze when the two men who sent Sherman running both glance at me. I think they might be brothers. They’re of a similar build, which is massive. Especially compared to my short ass.