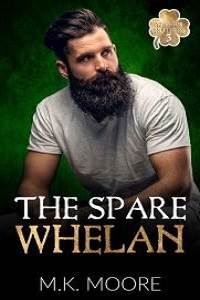 “Fin, what’s going on?” I ask, coming from the kitchen. I knew something was up, but I just didn’t know what, nor did I expect this.

“Is there a downtown?” Finola asks. She’s my cousin’s girl. They just met, and they are already engaged. I’ll admit I don’t understand that logic, but I like the idea that something like that could happen. I don’t know her well, but I can tell she’s about to laugh. Then I gauge the entire situation. There are two officers here. It’s clear she and Molly, a girl I’ve known for less than a week, are getting arrested. I know the guy, Sean. He was from two villages over. The female officer, on the other hand, I’ve never met, and she’s the most beautiful woman I’ve ever seen.

“What?” I ask. Unabashedly, I stare at the woman, Finnegan, her badge tells me. Her brown hair is braided and worn behind her. She’s tall, like me, but has a quiet reservation about her. She must be new in town because I’ve been coming to Killaloe every summer since I was a wee babe, and I definitely would have remembered her. I was the Spare Whelan, the one who didn’t quite belong anywhere as a child, but I’ve found my place now.

“I don’t know. When people get arrested at home, they say they are going downtown,” she replies, shrugging.

“Not really,” I say, chuckling. There is a Garda station nearby, though.”

“That’s where I’m going then.”

“I’ll tell Cormac, though I am not sure where he is right now.”

That was interesting, but I’m more interested in the lady cop. She spoke to my soul. I promise myself that I’d find her again, but I can’t leave the pub unattended. As soon as I found Cormac, he was out the door. I patiently waited for all the party-going patrons to get the feck out, and then I start cleaning the kitchen. I am a clean-as-you-go kind of chef, so I don’t have much rubbish to clean up, but the grill and the fryer need a good cleaning. I also need to mop the floors. I sent the runners and my sous chef home at the end of the night. They were exhausted, and I don’t blame them. When I moved here permanently a few weeks ago, I thought I’d get a job at a local restaurant, but then Finola and Cormac decided to do food here, it worked out perfectly. I get to design the menu from scratch, and I’ve always wanted to do that. When I worked in Dublin, I was a line cook and didn’t have any say in what was served; also, my boss was a dick of the highest caliber. Moving here was the right choice.

Later that night, though, I guess it’s technically morning, I’m still cleaning the kitchen when I hear the bell chime that the front door is open. Cormac and Finola have long since gone to bed, leaving the bar to clean up in the morning. I thought those two said they locked up; they must have been mistaken, though. As I come out of the kitchen, I am surprised to see the lovely officer Finnegan standing there, still in her uniform.

“Is it too late for a pint?” she asks, wringing her hands.

“I am not sure we have much beer left, but I am sure I could rustle something up for you, officer.”

“Beautiful name for a beautiful girl,” I say, gesturing to the bar. She sits down. I find a still cold bottle of Guinness in the cooler under the bar.

“Thanks, uh, I didn’t catch your name earlier.”

“Kiernan. Kiernan Whelan.” I extend my hand to her. She places her much smaller hand in mine. The zing of electricity that jolts into me might just be in my imagination, but I don’t think so.

“It was a rough night. Lots of drunk and disorderly arrests.”

“That’s to be expected, right?”

“Not usually. We don’t celebrate the holiday as American’s do. I usually pop into the church for confession and have a drink, but this was something else altogether. I’ve never seen that many people packed in here before. I’ve been an officer for three years now, but I’ve never had to work this holiday before. My feet are killing me. I don’t know why I’m telling you this or why I’m even here,” she says, chuckling with obvious embarrassment that I find adorable. She has a look of bewilderment on her face. I am all too happy to tell her about it.

“I really don’t. I was walking to my flat and saw the light still on,” she says, shrugging.

“You came back here for me. I was going to come and find you later today, but this works too.”