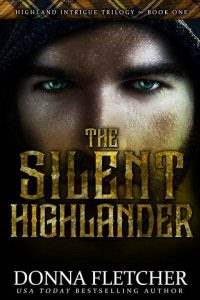 Elysia kept her steps swift for fear if she slowed even for a moment, she would lose her courage. She had to stay strong no matter how badly her stomach churned or how wildly her heart beat. There was no one left to protect her. Tears rushed to her eyes and she brushed them away, annoyed with herself. This was no time for weakness. Her two sisters had shown courage and it was time she did the same.

Only a few days ago life had been good. Then the two men arrived in the village, Lawler and Cadell, and everything had changed. But they were not to blame—the curse was to blame.

Elysia hugged her wool cloak close, keeping her steps sure-footed and paying no heed to the crunch of the autumn leaves beneath her feet. She had made a choice and she had to see this task done, though it paled in comparison to what her sister Bliss had done and what her sister Annis had set out to do. And it had all started with the curse. A curse cast over twenty years ago.

She wished she was as courageous as her two sisters. Both had made choices that far surpassed anything she was capable of doing. Her choice offered possible happiness, whereas, Annis’s choice proved dangerous, and Bliss’s choice could prove fatal.

The cottages along with the village faded behind her. It would not take long for her to reach her destination and once she got there… her steps faltered. She did not know what she would say or if she would have the courage to say anything at all.

She pressed her hand against her roiling stomach. Did she really think she had the courage to do this? And how did it benefit anyone but her?

She would be safe if things went as her sisters had been certain they would. But how did that help her sisters? Annis went off on a quest to find the witch of the hills to see if there was some way the curse could be broken. It had to be if Bliss were to survive. Bliss had agreed to wed Lord Rannick of the Clan MacClaren, the cursed lord, to keep Annis out of a forced marriage and in so doing had condemned herself to death. The curse had been cast against three clans some twenty years ago, but it was the descendants of the Clan MacClaren that was cursed to suffer the worst. Lord Rannick had lost three wives in a short time and a bairn as well. No one survived a marriage to him and in his own quest to quell the curse, it was believed he had lost his humanity, that he was more animal than human.

The thought shivered Elysia. How did Bliss survive such dreadful circumstances? And how did Annis survive her quest all on her own? She shook her head. Annis was stubborn and determined. But how did she survive a solitary trek through the woods to find someone many claimed was nothing more than a myth? But what choice had they if Bliss were to survive?

Elysia wiped at the single tear that had trailed down her cheek. There was a good chance she would lose both her sisters. She realized that was the true reason why Bliss and Annis had cautioned her to seek protection, though neither had voiced it. They feared she would be left on her own, all alone, with no one to look after her.

The thought roiled her stomach so badly she had to stop. With her hand once again pressed against her stomach, she sat on a toppled tree branch in hopes of calming her unease.

She could not say she hadn’t thought of marriage. She hoped one day to find love and have a family. Unfortunately, there were no men in the village she found appealing… until Saber.

Her cheeks heated at the thought of the man, and she smiled. Saber was nothing like she sought in a husband or that she believed she would find appealing. Most importantly, he was too large. He devoured her short height and his width was enough for her to hide behind, something she had already done—quite by accident—when trying to keep out of Lawler and Cadell’s sight as they searched for a wife for the cursed lord. His fine features were quite captivating as were his green eyes, though his eyes were bolder in color than her own soft green eyes. While she hoped for a quiet man, one not boisterous in nature or speech, she felt for Saber, he having lost his voice from a wound that left a scar across his throat.

She had learned some healing ways from Bliss, her sister being a healer. She had Saber drinking a soothing concoction and taking bramble berry syrup that she hoped would help heal his throat and fully restore his voice to him. She was sure when he did speak it would be with an unassuming voice. If there was one thing she dreaded in a husband, it was that he would be a warrior who favored the sword and battle. Warriors were far too commanding and demanding to be good husbands.