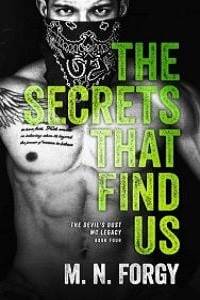 Reaching for the black Harley t-shirt with skulls and flowers on it hanging from a rope with clothespins, I knead the material between my fingers, my eyes scanning the shirt right next to it that has turquoise stones on it with guns and roses screen printed. This vendor has the best looking shirts and I want to get one before they close up shop.

My head snaps to the sound of a male voice. A guy stands right next to me that wasn’t there a few minutes ago. How long has he been standing there? His dirty blond hair falls in his sapphire eyes, red cheeks that taper into a strong jaw, and fuck me if he doesn’t have the sexiest crooked smirk I’ve ever seen.

“This one?” I point to the turquoise shirt with guns and roses, a small smile pulling at my cherry ChapStick-covered lips.

“Yeah, it’ll bring out the color of your eyes,” he flirts, and I look away just as my cheeks begin to flush.

He’s cheesy, but hell if it isn’t working. But not many guys know the color of a girl’s eyes in the first few minutes of talking to each other. Besides, he’s quite handsome, tempting even. Gazing at him from the corner of my eyes, I nervously chew on my thumbnail. Hmm, he doesn’t look like a biker’s son, he’s too clean. Most guys his age have skull rings on their fingers, a leather cut or jacket, and scars marring their skin. I can’t help but look for these things when finding someone attractive because I can’t even look in the direction of another club besides my own. It’s too risky. They could be wanting details on how my father runs his club on the inside; using me. It sounds arrogant, but these things have been pounded into my head and heart since I was a little girl. My parents don’t trust anyone outside our club or around me.

“What brings you to the rally?” I decide to ask. Curious why he’s even talking to me. Is he from another MC? Does he know who I am?

“My parents have a booth here, we paint helmets and shit. Just trying to get our names out for business,” he says, pulling the shirt we were looking at down from the clothespin and hands it over to the lady behind the table.

She’s short and stout with a belly hanging over a tight pair of jeans, her tits are screaming for a bra as they spill from her black spaghetti strap top. It’s hard not to stare at them.

I guess that would explain why I’ve never seen him at this rally before. We do it every year, making up a bike and auctioning it off for charity. My dad says it helps us get on the locals’ good side when our own dirty laundry hits the streets from time to time.

“Name is Thane,” he casually informs, handing the chick a twenty-dollar bill.

Spinning on my heel, I slip my hands into the back pockets of my shorts. “Delilah.” I look at my Chucks kicking the dirt around on the ground when I say it.

Peering up under my lashes, he smirks and I feel my whole body heat from the eye contact. Taking the bag from the big-titted lady, he hands it to me.

I nibble on my thumbnail again, eyes gazing down at the bag he wants me to take. I don’t know, I mean, I don’t even know this guy. Why would he buy this for me?

“Please take it, if you don’t, my boys will give me shit for the rest of the night.” A deep pitched laugh racks his chest and he looks over his shoulder. I follow his gaze and spot a couple of guys standing a few booths back, watching intently.

I laugh. It’s cute that he built up the courage to talk to me when his boys thought I’d reject him. I know how guys can be when it comes to things like this. I mean, I live around a club of bikers that are always giving each other shit, so I take the bag with the shirt inside. I can’t help but wonder if his stomach knotted before he talked to me. Did his whole body rush with a nervous warmth being next to me? Because that is exactly what I’m feeling at this very moment.

I want to act like I don’t care about his existence and play hard to get, but I’m failing miserably. He’s caught me off guard, and with every giggle, I feel my sanity melting into a pool of bimbo around my feet.

“Want your receipt?” The lady behind the booth holds a piece of ripped paper to Thane.

He takes it and plucks a pen from beside the register sitting on the gray table with folded shirts. He scribbles something on the paper and hands it to me.