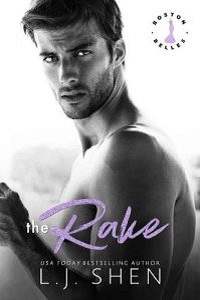 Rolling Stones: “Under My Thumb”

Everybody Loves an Outlaw: “Red”

I’d been betrothed shortly before I was conceived.

My future written, sealed, and agreed upon before my mother had her first ultrasound appointment.

Before I had a heart, a pulse, lungs, and a spine. Ideas, wishes, and preferences. When I was no more than an abstract idea.

A box to be ticked off.

Her name was Louisa Butchart.

Lou, really, to those who knew her.

Though I would not be aware of the arrangement until I turned fourteen. Told right before the traditional pre-Christmas hunting trip the Whitehalls had with the Butcharts.

There was nothing wrong with Louisa Butchart. Nothing that I could find, at any rate.

She was lovely, well-mannered, of excellent pedigree.

Nothing wrong with her at all, except for one thing—she wasn’t my choice.

I suppose this was how it all started.

How I became who I am today.

A fun-loving, whiskey-drinking, fencing, skiing hedonist who answered to no one and tumbled into bed with everyone.

All the numbers and variables were there to create the perfect equation.

Morally divided by more money than I could ever burn.

I’d been blessed with the right physique, right bank account, right smirk, and right amount of charm. With only one invisible thing missing—a soul.

The thing about not having a soul was that I wasn’t even aware of it.

It took someone special to show me what I’d been missing.

She cut me open and tar spilled out.

This is the true royal rake’s secret.

We rode at sunset.

The hounds led the way. My father and his comrade, Byron Butchart Sr., followed closely. Their horses cantered in perfect rhythm. Byron Jr., Benedict, and I trailed behind.

They gave the young lads the mares. They were unruly and harder to break. Taming young, spirited females was an exercise men of my class had been given from a young age. After all, we were born into a life that required a well-trained wife, pudgy babies, croquet, and alluring mistresses.

Chin and heels down, back ramrod straight, I was the picture of a royal equestrian. Not that it helped me avoid being thrown into the sweat box, curling into myself like a snail.

Papa loved throwing me in there for the sake of watching me squirm, no matter how hard, how diligently, how desperately I tried to please him.

The sweat box, also known as the isolation bin, was a seventeenth-century dumbwaiter. It had a coffin-like shape and offered the same experience. Since I was notoriously claustrophobic, this was my father’s go-to punishment whenever I misbehaved.

Misbehaving, however, wasn’t something I did often, or even at all. That was the sad part. I wanted badly to be accepted. I was a straight A student and a gifted fencer. I’d even made it to the England Youth Championship in sabre, but was still thrown into the dumbwaiter when I lost to George Stanfield.

Perhaps my father always knew what I tried to keep concealed from view.

On the outside, I was perfect.

On the inside, however, I was rotten to the bone.

At fourteen, I’d already slept with two of the servants’ daughters, managed to ride my father’s favorite horse to its untimely death, and flirted with cocaine and Special K (not the cereal).

Now, we were going foxhunting.

I quite hated foxhunting. And by quite, I meant a bloody lot. I detested it as a sport, a concept, and a hobby. I drew no pleasure from killing helpless animals.

Father said blood sport was a great English tradition, much like cheese rolling and Morris dancing. Personally, I thought some traditions did not, in fact, age as well as others. Burning heretics at the stake was one example, foxhunting another.

Noteworthy to distinguish foxhunting was—or shall I say is—illegal in the United Kingdom. But men of power, I’d come to learn, had a complex and oftentimes tempestuous relationship with the law. They enforced and determined it, yet disregarded it almost completely. My father and Byron Sr. enjoyed foxhunting all the more because it was forbidden to the lower classes. It gave the sport an added shine. An eternal reminder that they were born different. Better.

We were heading into the woods, passing the cobbled path to the grand iron-wrought gate of Whitehall Court Castle, my family’s estate in Kent. My stomach churned as I thought about what I was about to do. Kill innocent animals to mollify my father.

The soft tapping of Mary Janes clunked behind us, hitting the pebbles.

The voice was breathless, needy.

I leaned back on Duchess, pushing my feet forward, pulling at the reins. The mare gaited back. Louisa appeared at my side, clutching something wrapped haphazardly. She was in her pink pajamas. Her teeth were covered in colorful, horrendous braces.

“I got you thomthing.” She slapped away pieces of the brown hair sticking to her forehead. Lou was two years my junior. I was at the unfortunate stage of adolescence where I found anything, including sharp objects and certain fruits, sexually appealing. But Lou was still a child. Loose-jointed and pocket-sized. Her eyes were big and inquisitive, drinking in the world in gulps. She was not exactly a looker, with her average features and boyish frame. And her braces gave her a speech impediment she was self-conscious about.