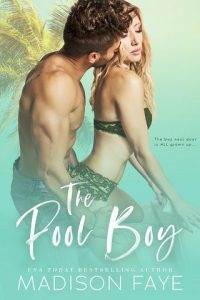 The southern California sun beats down on my glistening skin, making me tingle all over. A tease of heat throbs through me, pooling between my thighs as my thoughts turn dirtier, and filthier. Behind my sunglasses, my brow furrows, my eyes squeezed shut. My lips part, and I gasp slightly as my fingertips tease lower over my hips.

My tummy caves, and my pulse quickens as the memories of last night come flooding back. I flash back to what I saw, and who I saw, and my core tightens. My arousal floods my bikini bottoms, and I rake my teeth over my lips as my fingertips brush the elastic edge.

The backyard is hardly the place for this, but I know I’m shielded from any prying eyes. It’s one of the reasons I bought this house four years ago when my company was first blowing up. A lot has changed since that first taste of success, but the utter privacy of the pool area in my backyard has stayed the same.

The warm air licks over my skin, and I squirm in the lounge chair. My fingers push under the waist of my bikini, and I gasp quietly. My mind slides back to what I saw—what I watched—last night, and my nipples harden to points under my thin top. My mind replays the way his abs tightened, and the way his hand gripped his huge, thick cock so hard. The way he slid that hand up and down, his head thrown back, his biceps rippling and that jaw of his grinding hard.

This is fucking wrong. What I saw last night isn’t as inappropriate as it could have been, but it’s close. And thinking about it—thinking about him—now, is only pushing it further into “wrong.” I know damn well I should have looked away, but there was no looking away once I laid eyes on that. There was no ignoring the raw heat that blazed through me at the sight of… well, him.

His name is Mason Dunn. He lives next door to me, and last night, I realized that the windows of my recently remodeled master bathroom look directly into his bedroom.

…His bedroom in his parents’ house.

I watched the boy next door stroke his thick, big cock last night until he came all over himself, and I haven’t stopped thinking about it since. At. Fucking. All.

Like I said, it’s not as bad as it could have been, at least. Four years ago, when I first bought this house, seeing what I saw last night would have been illegal. It would have branded me a pervert of the worst kind. But that was then, and this is now, and a lot’s changed since then.

He’s changed a lot since then. That cute, charming boy next door isn’t a boy anymore at all, for one. I basically moved away from here two months after I moved in. My lingerie company was blowing up, and I ended up spending more and more time in New York at my new offices there. Eventually, I was mostly just a New Yorker ninety percent of the time. I wasn’t here to see when Mason Dunn graduated high school and went to Stanford. I wasn’t here to see when he went from tall and lanky to built like a quarterback.

But I’m here now, and oh do I see what he’s become.

Even last night, afterwards, I lay in bed trying to rationalize it. I told myself I was just extra on edge from going on two years of celibacy, and that includes when I was still married to Jeremy. My best friend Celeste was sure that after I divorced Jeremy’s scummy cheating ass, I’d be out there living the swinging single life and falling into one hunk’s bed after another.

And maybe that does happen for some people, but not when you’re in the middle of selling off the company you spent your life building. Even when that was done, and I found myself basically retired at thirty, I just couldn’t bring myself to go out there and “date.” It just wasn’t for me, and the idea of trying to make small talk at some bar or try and weed out the psychos on something like Tinder was overwhelming.

So, six months after the divorce, I had half my LA house remodeled, sold my New York condo, and moved back here.