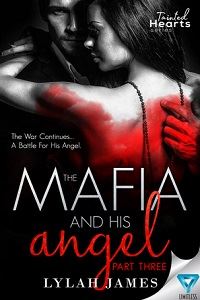 I had him…and then I lost him. I lost everything.

My wings were ready to fly, but the Devil clipped them, feather by feather, until I had nothing left.

Then my savior came, waging a bloodbath to find me. He loves me. He wants his Angel to be free.

But how could I fly again when my wings were broken?

I had her…and then I lost her. I lost my Angel, the reason for every breath I took.

If he thought he could break her and just disappear, he was wrong. I was going to find him and break him, like he broke her.

This war wasn’t over.

I made a vow to my Angel.

And my vows are never broken.

This was a battle for my Angel.

I watched Alessio break right in front of my eyes.

I have known him for years—since we were babies—and very few times had I seen him at his weakest moment.

Since his mother’s death, I had never seen him shed any tears. Of course not. He was the boss of four families. The Pakhan of the most ruthless Bratva. He was cruel and heartless.

But right now, he was breaking.

He didn’t care that his men were watching. All his focus was on Ayla.

I watched him cry. As he rocked Ayla back and forth, his arms tight around her, I watched my boss, the man whom I have known to be ruthless, cry for his woman.

I stood frozen, just a few feet away from them. My eyes shifted to Ayla, and my chest tightened. It was a small change of emotion, but it was painful. Painful because I had never felt this way before.

Nikolay moved to stand beside me, and I quickly shook my head, trying to clear my mind.

“This is messed up,” he muttered, a look of horror masking his face.

As I nodded, I saw Nina rushing past me. She knelt in front of Alessio and Ayla. Nina was still and I counted the seconds in my head.

She turned around, her expression cold, but her eyes spoke volumes. She gave a slight shake of her head.

I understood what she meant. It was bad. Very bad.

Nina turned back around, and I saw her quickly removing her jacket.

“Alessio, we need to go,” she said, placing the jacket over Ayla’s almost bare body.

He didn’t move. Alessio was so lost, he didn’t even hear us.

“My jacket is too short. It barely covers her.”

Nikolay moved forward, removing his jacket. I closed my eyes and took a deep breath. We were wasting time.

Fuck! We didn’t have time to waste. For all we knew, we were about to be ambushed as we stepped out.

I waited for Nina to wrap Nikolay’s jacket around Ayla’s body as much as she could with Alessio in the way.

When she was done, I nodded at her to move away. Taking her place in front of Alessio, I looked down at Ayla. Her face was pressed in Alessio’s neck, and it was hidden by her greasy, matted hair.

I leaned forward, ignoring the sound of Alessio choking back his cries. I even ignored the way my stomach cramped at the sight of Ayla like this. Moving her hair to the side, so that her bruised face and neck were visible, I placed my finger on the side of her neck, right over the pulse.

It was faint. Slow, but at a steady rate. It was good. At least for now.

My eyes shifted to her chest, watching the slow rise and fall. It was too slow, almost as if she was fighting to take each breath.

My gaze followed a path down her body to the shackles around her. I touched the heavy chain and pulled at the small latch on her left ankle. It gave way. The shackles weren’t locked around her wrists and ankles. One after another, I pulled them off until she was no longer chained.

Sighing, I looked up at Alessio. “We have to go.”

When he didn’t respond, I touched his shoulder. “Alessio, we need to get out of here. Now!”

No response. What was going on in his fucking mind right now? Was he too far gone?

Shaking my head, I pushed the thought away.

My hand tightened on his shoulder. There was only one way to snap him out of his daze.

“We need to get Ayla out. She is not safe here,” I muttered quietly.

His head snapped up, his eyes meeting mine. My heart might have stopped for a second. The look in his eyes was heartbreaking.

I remembered the day of his mother’s funeral. Or even the moment we found him after his mother’s death. He didn’t cry. No, he stood there emotionless, watching everything happening around him.

You would think a man like that wouldn’t understand heartbreak.

But the look in his eyes right now showed so much pain that even I felt it.