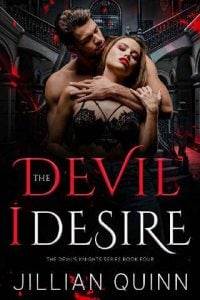 I don’t belong here. The thought rolled around in my head as I moved through the crowded ballroom. People stared at me with wonder and a hint of irritation because people like me were not welcome among the elite.

Our invitation to the masquerade ball arrived in a gold box. Ornate and decorated with olive branches, I wondered if the box was a joke. An olive branch, of all things? Was Arlo Salvatore messing with my family once again? It would not have been the first time he’d agreed to let us into his carefully curated world, only to make us look like fools in the end.

I was smart enough to know the Salvatores would never consider my family worthy. My dad was a gangster, a criminal. He was the leader of the Irish Mob, feared by anyone with the sense to know he was dangerous. But Arlo and his sons feared no one.

Women dressed like fairies from A Midsummer Night’s Dream, their eyes decorated with glitter or hidden by a mask. They looked ethereal, as if they were the Shakespeare characters brought to life. The men wore tuxedos with masks hiding their faces. I didn’t need to see their faces to know which monsters lurked in the shadows.

From across the room, I spotted Marcello Salvatore staring at me. He wore a red and black carnival mask. His black hair was messy on purpose, and as usual, falling onto his forehead.

He stood beside his older brother, Luca. They were both gorgeous beyond words, with chiseled jaws, Roman noses, and the most haunting blue eyes I’d ever seen. Marcello’s eyes looked sad, while Luca looked like the Devil possessed him. They shared their father’s good looks, both tall and muscular, though Marcello was broader in the shoulders and chest.

My cousin, Shane “Sonny” Cormac III, moved across the room with a glass of scotch in hand. He flashed his usual golden boy smile at everyone he passed, stopping beside Marcello after he worked the room. The pair had been best friends since they were kids.

From the moment I met Marcello, he became my obsession. I was fourteen years old, awkward, and still wearing braces. Marcello was three years older than me, and back then, the quarterback of the Astor Prep football team. Sonny let me come to one of their games. That was the first time I met Marcello.

After that day, I tagged along with my cousin and his best friend. I went to all of their football games and followed them to the after-parties. And by the end of Marcello’s senior year, I ditched the braces, fixed my hair, and he took my virginity. If Sonny ever found out, he would have killed Marcello. He watched over me like an overprotective brother. Since I was an only child and always on my own, Sonny was there whenever I needed him. And when no one was watching, so was Marcello.

I took my sweet ass time walking around the room, observing the Devil’s Creek WASPs in their natural habitat. Alexandrea Wellington stood beside Luca Salvatore, dressed in a pale pink fairy dress that barely covered her thighs. She wore a silver mask, her blond curls framing her heart-shaped face. Like most of the people in Devil’s Creek, Alexandrea and Luca’s families arranged their marriage.

Luca looked slightly annoyed. His top lip curled up in anger as his eyes flicked to Alexandrea. She shot an equally pissed-off expression at him. My father didn’t care enough about my future to marry me off to a wealthy man. At least, that was one thing I had going for myself.

Aiden Wellington floated through the room, pounding glasses of whiskey. He looked even more irritated than his twin sister, like he would rather eat glass than mingle with the people at this party. I moved toward him, knowing he was the perfect target. We could bond over our mutual disdain for the Salvatores.

I leaned against the bar beside Aiden, and he looked down at me with one eyebrow lifted. He had the prettiest blue eyes I’d ever seen up close. His hair was blond and curly, like his sister’s, except his hair was short on the top. He reminded me of Ryan Phillippe in the movie Cruel Intentions, the bad boy attitude and all.

A dimple popped in his right cheek when he smiled. “I’ve seen you around Beggars Bay.”

I tipped my nose up at his dig about my hometown. Everyone from Devil’s Creek referred to Beacon Bay as Beggars Bay because of the increase in crime and decrease in wealth. Still, our towns were only ten minutes by car. So it wasn’t like we were slumming it, either. But compared to billionaires like the Salvatores, Cormacs, and Wellingtons, we were white trash. Or so they thought. My father’s mansion was the size of the guest quarters at the Salvatore Estate.