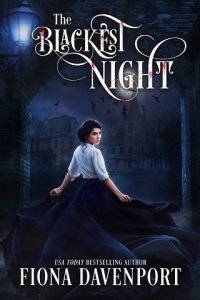 Another nightwalker went up in flames before falling into a scattering of ashes on the ground. I turned around to see that my brothers had also taken down the remaining two from the nest we’d just flushed out.

I grabbed my stake and brushed away the ash before securing it into the loops that tied around my calf. Then I sauntered over to my brothers, Kieran and Athan, who were dusting themselves off.

“Sometimes, I feel like Cinderfella with all the dust I have to wash off,” grumbled Athan.

Kieran snorted. “Like you don’t use it as an excuse to get your consort in the shower with you.”

I rolled my eyes and cuffed them both on the head, which was easy to do since I was taller than both of them by a half foot. But I still had to bob and weave to avoid shots to my stomach and kidneys.

At six foot five, I’d outgrown my older brothers, and our features differed vastly. However, we all shared the trademark bright blue eyes and black hair that came with being a Bancroft.

“I don’t need to hear about the things you do to your wives in the bedroom,” I told them drolly.

The subject matter wasn’t the issue. It wasn’t as though the conversation would arouse me since I couldn’t experience any kind of sexual feelings or sensations with anyone but my fated mate. The problem was discussing their mated, blissful lives.

I was overjoyed for my brothers to have each found the one person in the universe that had been created just for them. And I adored my sisters-in-law and the little ones. But I was envious of their soul-deep happiness. Sometimes, it was challenging to be the only one still alone, especially when I saw the connection between my brothers and their consorts. It shed a bright spotlight on the emptiness of my life. After so many years, it had become a painful void.

My brothers and I were daywalkers. Born vampires who could traipse around in the sun—though we preferred not to as we burned easily with our pale skin. Plus, our light eyes were made for seeing clearly in the dark, and sunlight hampered our vision. We were immune to everything people associated with vampires and could only be killed by removing our heads and burning our bodies. Besides all of that, we were born with one perfect person who would be our partner, the other half of our souls.

Nightwalkers—the vampires people read about in books—were bitten, and most of them were evil, spending their nights hunting the consorts of daywalkers to dwindle our population.

Ridding the world of those parasites was our job, protecting and escorting consorts to their mates, or the council that would help unite them. Other than the “hobbies” I dabbled in—such as my billion-dollar tech company—there wasn’t much else to do with my endless amounts of time.

So, I’d thrown myself into the job. Kieran liked to tease me about being a workaholic, but we both knew he was only half-joking. Guilt crept in from time to time because I wasn’t spending as much time with my brothers and their families. We were immortal, though, so they understood my need for time.

My phone vibrated in my pocket, and I dug it out to glance at the screen. It was a text message with the information for another assignment if I wanted it. What else was there to do? I shot back a quick message to accept it and get more details.

“You should come by the house,” Kieran suggested. “Thana will have Ronan ready for bed, and you know how he loves when his uncle Stephan reads to him.”

Ignoring the spike of guilt, I shook my head and waved my phone. “Work.”

Athan’s brows drew down, and he frowned. “You work too much.”

“Yeah, yeah,” I muttered. “I’ll stop by tomorrow. Give your better halves and little ones kisses from me.”

Athan put his hand on my arm, and I met his worried blue eyes. “Don’t forget the party the day after tomorrow. You promised Selene you’d be there.”

I nearly groaned. Athan could use his wife as an excuse all he wanted, but I wasn’t buying it. His best friend, Silas, used to throw balls like this. Basically, playing matchmaker. We’d made fun of him endlessly about it until he’d been too busy with his Von Trap-sized family to host them anymore.

Then one day, Athan announced that “Selene” was having a party, and the way he wouldn’t meet my eye told me all that I needed to know. He was inviting potential consorts and trotting me out like a prized pig. I appreciated that he wanted me to be as blissful and settled as he was, so I attended them to make him—“Selene”—happy.

“Sure,” I sighed. Then I gave them a lift of the chin in farewell before teleporting to the address the council had sent me.