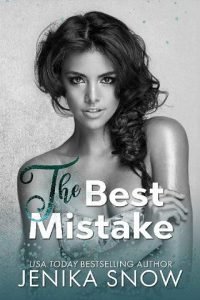 Shoshanna adjusted the backpack on her shoulder, pushed her glasses up the bridge of her nose, and stared at all the students heading into the building.

She hated high school, wished that this eighth level of hell were over with already. But as a senior she only had this last year of feeling like she had some kind of deformity, like she was this abscess because she wasn’t thin and popular like the majority of the girls at this shithole.

Shoshanna kept to herself, did her work, and kept her nose out of others’ business. But it wasn’t just because she liked being a good student and getting good grades. Her mother kept on her, made sure she was the overachiever she was, and because of that it was just engrained in her that she could never fail.

After four years of being teased by the snotty bitches, ignored by the popular jocks, and looked at like she was nothing more than a geek, she was ready for it to be over with. High school was not the end of the world, wasn’t the last stop for anyone.

It was a speed bump, one she was having a hard time getting over, but would eventually. She was ridiculed because of her weight, because she did extra schoolwork, and even though they were almost adults she was still made fun of.

Yes, high school was definitely the bowels of hell, and she was the center of the torture, had been for her entire life it seemed.

She made her way toward the front doors and away from the school buses and student parking. The rest of her senior class seemed to have their own transportation in the forms of crappy little cars that were used or hand-me-downs.

But Shoshanna’s parents had money, and because of that and the fact she was dropped off in her father’s Mercedes, she had also been called an uptight, rich bitch.

The deep drawls of voices pierced her thoughts, and she glanced to the side. Her heart stopped beating for a moment when she saw who leaned against the side of the high school. Toby Mason, the school bad boy, all-star jock, and town man-whore, started laughing at something one of his asshole friends said.

He pushed off the building and strutted up to the school where he met up with Marilyn Pierce. Marilyn, the school’s most popular, gorgeous, and perfectly styled cheerleader, and a female that made it no secret she put out for her Adonis boyfriend whenever he demanded, had been with Toby since the ninth grade.

They were perfect for each other, perfect in general, and it nauseated Shoshanna.

“Excuse us.” Marilyn said it to her in a sour, snappy way. Shoshanna moved out of the way and watched as they headed up the stairs. God, at only eighteen years old Toby was built with thick muscles, and had several tattoos on his back, as was evident when he removed his shirt for football practice.

He even had the cockiness to go along with knowing he was gorgeous. He looked over his shoulder, and she swore their gazes locked for a second. But Shoshanna knew that couldn’t be the case. They might have grown up in the same town and gone to the same school, but to Toby she was invisible.

She was just the chubby, geeky girl that probably stared at him too often.

He turned around almost as soon as he had looked at her, and just like that the connection was broken, or at least the connection she had felt. She headed inside, ready to finish the day and it hadn’t even begun.

After putting her bag in her locker she heard the bell for first period, turned with her books in hand, and slammed right into a hard chest.

Her books fell and scattered across the floor. Shoshanna muttered an apology without looking up, and bent down to grab her books. She pushed her glasses up, having not been able to find her contacts this morning, and hating that the frames gave her the stereotypical appearance of being a nerd.

A thickly muscled and tattooed arm reached out and picked up her economics book, and she stopped. Slowly moving her gaze up the black t-shirt that was stretched across the hard chest, she stared into Toby’s blue eyes. His black hair was short, kind of spiky around his head, and he smirked at her.

“I’m sorry,” she said again, this time in a softer voice.

“I’m the one that wasn’t watching where I was going.”

They stood at the same time, both holding the other’s gaze, and then finally Shoshanna turned her stare to the lockers behind him. This was weird, awkward, and she knew he was probably scrutinizing her. Hell, she was wearing a plaid shirt tucked into her khaki skirt, and a pair of brown flats that did nothing to accentuate her ankles.