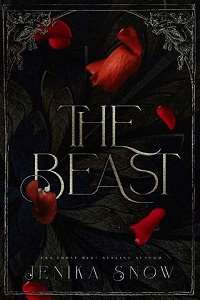 They called me the Beast.

A literal monster that stayed high in the mountains, my castle overlooking the village like an ominous presence.

They feared me. Rightfully so.

They would do well to treat me like the ravenous, rabid creature I was.

So I stayed away, secluded myself with minimal staff to run the castle, and let my inner rage be my companion.

Until the sun set.

That was when I hunted her.

Belle was a human female I had known nothing about, but she instantly called to something dark and primal inside of me.

Ever since that first glimpse all those nights before, when I hid within the shadows and watched her come out of a small shop, I was positively transfixed.

Because she was mine.

I did not fear anything and was not ashamed of my appearance or the barbaric way I acted. It was who I was, the animal I had been born.

But still, I kept to the shadows, not wanting the villagers or, most of all, Belle to see me. I feared I would frighten her away, that she would see the ugly visage of my face and body, my horns and claws, fangs and tusks, and scream as she ran from me.

But then there was the very thought of her running or me chasing her, hunting her down through the woods as I stalked my most precious prey.

I crouched low on my haunches, digging my claws into the dirt, staring at the small bakery she had just entered.

I could barely see her through the window from my positioning, but moments later, she stepped out, her long dark hair hanging over one shoulder in an intricate braid.

I could not help but envision wrapping one of my meaty paws around those silky strands and tugging her head back, baring her throat and looking at the soft spot where her neck and shoulder met.

Although I did not need to mark her, did not need to sink my fangs into her to lay claim, I still would. I would hold her in place with my teeth at her throat as I pushed my too-big cock into her and made her take every inch.

She would stretch so nicely around me, cry that it hurt, that I was too large, but I would make her feel so good she would be begging me for more.

I would ensure that.

She wore a light blue dress with a white apron tight around her hourglass waist, her body so lush and curvaceous that my cock instantly stood at attention, the heavy, ribbed length pulsing behind my trews, pre-cum already starting to drip out and dampen the front of the material.

I growled low and reached down, curling a big clawed paw around the girth, stroking myself like a deviant as I watched her adjust her basket before she left the village and made her way toward the small cottage she shared with her father.

Her father was a worthless human who spent what little money they had on gambling. If not for Belle, they would have no roof over their heads or food in their bellies.

But his downfall would be my gain.

I watched Belle until she disappeared, and only then did I focus back on the village center. The sun had set long before now, the townspeople scurrying away into their homes.

I kept close to the buildings as I prowled the village, stopping once I got to the tavern where I knew Maurice, Belle’s father, would be, where I had sent Pierre, one of my staff, to be present before sunset.

I looked through the sash window and into the pub. The antler chandelier hung in the center of the room from wooden beams that ran vertically across the ceiling, shining a yellow glow across all it touched.

The tables were scuffed and scarred, spilled ale covering the tops, and dripping onto the floor. I searched for Pierre and saw him over by the long planked bar, a mug of alcohol in his hand, his focus on Maurice.

Pierre was a spindly man, nonthreatening, and the perfect person to do my bidding. Because Gaston would see him as nothing of importance.

Although I could very well take Belle without this charade or planning, could rip Gaston’s head from his neck, I did not want to start my nuptials with Belle on the wrong foot, as the humans would say.

I focused on Maurice, who sat at the table with Gaston and a few of his minions, wooden chips they used as currency in their games in the center of the table.

Maurice was sweating, his face glistening with droplets that caught the light, his cheeks ruddy, and his hands buried in his hair as the sheer panic swamped him.