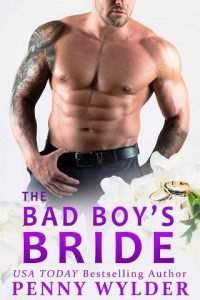 The email that’s popped up on my phone honestly makes no sense. Something about a will? I didn’t think that I had any family on my dad’s side that even knew who I was, let alone cared to contact me. But there the email is, staring at me, with a fully paid, round-trip ticket to Wyoming booked for two days from now.

The message on the screen promises that it will be worth my while, but I’m incredibly confused and not at all convinced. I’ll have to ask Solomon for time off. I think that he’ll say yes, given how well I’ve been doing in the kitchen lately, but after all, it is Solomon. Mercurial, unpredictable, ticking timebomb Solomon. His moods change depending on how the wind blows, or how the bechamel bubbles, and I’ll have to make sure that I ask him at the right time.

“Fucking hell.” The words come in a vicious tone as Melody bursts out the back door of Alaban—the restaurant where we both work. It’s one of the best restaurants in Denver, with two Michelin stars. If you work well in this kitchen, you can work at any restaurant in the country. It’s that prestigious. And so far, I’m doing pretty well at working here.

“What happened?” I ask, although I can anticipate her answer. Solomon.

Melody is a rank above me as a station chef. She works the grill, and she’s amazing at what she does. Sometimes on my breaks, I even stand aside and watch her work. But Solomon likes to be everywhere at once; he loathes to cede any control in the kitchen, and before he became head chef, the grill was his domain. He and Melody have a history of butting heads when he gets too territorial over his old turf. It’s a complaint that I’ve heard plenty of times before, and not just from Melody. But we let each other vent, even though there’s nothing we can really do about his shitty attitude and behavior.

I’m only a junior chef here, and I work under Solomon, assisting him with anything that he needs. But because of that, I’m in a unique position to know exactly the kind of temperament he has. Whenever we’re in the kitchen, I’m never more than a few feet from his side. He is absolutely brilliant, and I learn a lot from him. But like a lot of brilliant men, he has a temper, too much confidence in his own abilities, and too much power.

“Same old shit,” Melody says. “I’m not grilling fast enough. The temperature isn’t hot enough.” She raises her hands and put quotes in the air. “‘We’re going to have people sending back cold food.’ Cold food my ass. He knows that the grill is hot enough. He checks it every five minutes. I don’t know what’s up his ass today, but I hope he gets over it before service is over.”

I snort. Most of the kitchen feels comfortable talking to me about Solomon because I don’t judge them, and I’d never betray their confidence. But I also never say anything back. I have high ambitions, and I’m not going to put myself in the middle of other people’s drama and risk word getting back to Solomon. There would be no quicker way to sabotaging my career than that. I give my friends my ear and sympathy, but make sure a negative word about Solomon doesn’t cross my own lips. So far, my plan is working. Solomon told me recently that a promotion is coming. I’m not going to do anything to screw that up. Literally nothing.

Jane—one of the servers—steps out into the alley as well. She comes out regularly to smoke, and to bitch about the way Solomon speaks to the servers. He definitely should be nicer to them, considering servers are the face of the entire restaurant. It’s their service and professionalism that leaves the greatest impression on our customers. And when Solomon is a dick to them, they aren’t at their best on the floor. These are all things that I’m filing away in my mind, for when I run my own restaurant one day.

No one ever said that you only have to learn from the positive things. I find my greatest lessons in watching Solomon screw things up. What not to do.

“Rage break, Melody?” Jane asks as she lights up a cigarette.

Melody blows out a breath. “You know it. I was about to lose my shit, so I passed the grill to Miguel for a minute. He can handle it.”

I keep scrolling through my phone, but I come back to the email with the plane reservation. Am I going to go? I don’t know why I would, but there’s something about the wording of the email. Something desperate but also kind. It draws me in and makes me want to find out what the hell is actually going on.