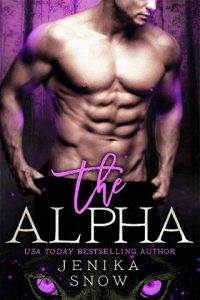 I wasn’t a man. Not human, but something else, more powerful. Deadly. The strongest Otherworld creature that was known to walk the planet.

My Lycan’s distorted growl reverberated through my skull, my body locked tight, my focus sharper than it had ever been in the over two and a half centuries I’d walked this world.

It was her voice that had my inner beast rising in a way I’d never felt or experienced before, causing a pain unlike anything I could have imagined. I thought he was strong before, but hearing her voice made him exponentially so, as if I housed a hundred Lycans within me, and I’d destroy anything or anyone who thought to keep her from me.

My hand was lifting on its own as I gripped my shirt, right over my heart. The organ was racing, pounding something painful and fierce as I moved closer to the source of the loveliest, most beautiful sound I'd ever heard.

And then I was standing there, staring at Caelan’s mate as she held a cell phone and panned it around the interior, showing off the wealth and luxury of the Scottish Lycan king’s estate.

My animal pushed and clawed forward. I felt my eyes flash as he took supremacy.

She’s ours. We found her.

“I’m putting it on record that this is a stupid fucking idea.” The words tumbled out of me and Darragh laughed, but I could tell she was having just as hard a time with this as I was.

My best friend. My sister by choice, not blood. We’d always had each other’s back. We’d had to, because as orphans we’d had to face this ugly, nasty world alone right from the beginning.

Having been thrust into the foster system at a young age, I had to learn from early on that you either became stronger or you would forever be seen as weak. And I would never be that way. I’d never let my circumstances dictate who and what I was or how it shaped my future.

And so even though I was heartbroken that Darragh was leaving for Scotland and trying to find out her future and past, I wanted her to succeed as much as if it were me heading out for a new adventure.

So I stood there and said goodbye, but it wasn’t forever. It was to better her life, find her path… give her meaning. A part of me wished I had something to find, to search for, to connect with.

So although I didn’t have some incredible journey to go on—one I knew Darragh would succeed in, where she’d find that future she desperately wanted—I told myself I’d get what I always wanted too.

One day, somehow, I’d get my own happily ever after. I didn’t know when or why or how… but I was going to get it, even if it was the very last thing I ever did.

One day. Twenty-four hours. A little over fourteen hundred minutes.

That’s how long Darragh had been gone on the greatest adventure of her life. And what was I doing? Lying in bed and listening to the city life that should have just been rousing after a long night, but the truth was this fucking city never slept. There was no downtime, no silence. It was always chaotic.

But lying here in my semi-darkened room as I stared at the stained and chipped ceiling of my one-step-up-from-a-hovel apartment solidified the feeling that I was truly alone for the first time since Darragh had come into my life.

I felt this gnawing hole in the center of my chest and had a cold, hard slap of truth hit me upside the head when I realized I may have been using Darragh as some kind of crutch, an anchor, a life jacket… hell, the foundation of the house that was my screwed-up life.

I tried to block out the sounds of early morning city life right outside my apartment window, but it was no use. It was loud because the cheap windows were so paper-thin. But I couldn’t complain too badly. I did have a view—even if it was just a side street and a bunch of professional buildings. I knew the tenants on the other side of the building had a shitty view, one that stretched the entire width of the complex and blocked all those windows.

“Could be worse, so stop complaining. It has been worse,” I grumbled. I closed my eyes and rubbed them with the heels of my hands. I was bone-tired, but I couldn’t sleep. After coming home late from work, I’d managed a few hours, but it had been broken up, restless, and now I couldn’t even pray for some shut-eye.

I’d had bouts of insomnia for the last several weeks, as if there was something inside of me gearing up, ready to explode outward. I couldn't describe it, couldn’t even pinpoint what the issue was. Maybe it was just all the nerves and anxiety over Darragh leaving for her trip.