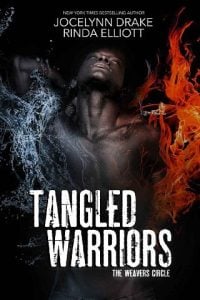 “Get the hell out of the way!” Lucien bellowed.

This was a goddamn disaster. Thousands of people were running everywhere, screaming and clogging up the streets. It was impossible to tell who was a pestilent, who was under the pestilents’ control, and who just happened to be in his way.

And all this was before he could get his fucking books signed.

This was definitely going on the list of worst days ever.

“I’m not in your freaking way,” Calder snapped at him. “I’m protecting your sorry ass.”

Lucien gritted his teeth and turned away from the Water Weaver. He was too tempted to shoot a ball of fire up his ass. They needed to get this crowd sorted and protect Grey’s back while the Soul Weaver freed the innocent humans of pestilent mind control.

It had all started as a normal, beautiful February day. One look at Clay’s grumpy face made it clear that the Earth Weaver didn’t expect it to stay that way, though.

The Savannah Book Festival was a highlight of the winter events calendar in the city, and this year Grey had been invited to be one of the forty guest authors. The Soul Weaver had been reluctant to accept, thanks to the pestilents, but both the man’s agent and publicist, along with the festival committee, had been insistent. They considered Grey a local author now, and he was a best-selling thriller writer. Everyone saw this as a giant win.

Everyone but the Weavers.

The plan at the start of the festival had been to serve as support for Grey. He would give his talk and sign some books. The rest of the Weavers would patrol the three squares where the festival was taking place and quietly remove any pestilents they encountered. They couldn’t allow more to be called.

And yeah, maybe Lucien had brought a few books along to be signed. But these were some of his favorite authors. How many chances was he going to get to see them?

Luckily, Grey had managed to negotiate with the planning committee to have his speech earlier in the day and then follow it almost directly with his book signing. The hope was that by midday Grey would be able to beg off with some kind of excuse of not feeling well, and they’d all leave prior to the pestilents discovering them.

The speech went fine, and Lucien had nearly laughed at how Cort was swooning with pride over his mate.

But things had gone to hell at Grey’s signing when one of the “fans” attempted to attack Grey with a knife. Cort and Baer had grabbed the woman, saving Grey from receiving more than a little scrape on his arm. Grey removed the mind-control spell, and the poor woman had no idea what was going on or how it had all happened.

Unfortunately, the damage was done. The attack had been like the firing of a starter pistol. Telfair Square was suddenly flooded with pestilents and people controlled by the pestilents. There was zero attempt on the part of the Weavers to hide their powers. They couldn’t and expect to survive.

Fire danced from Lucien’s fingertips, encircling Grey as he worked to remove the pestilent spell from one person after another. Clay ordered Baer to get Dane, Wiley, and Cort to the car. A pestilent fight was no place for the mates. While they might have received powers from their partners, they generally weren’t the types to help them in a fight. Cort was starting to learn to remove the mind-control spell from humans, but he needed more practice that didn’t include screaming chaos.

Clay was searching for pestilents while Lucien and Calder were stuck on guard duty, keeping Grey safe while he saved humans.

Unfortunately, Calder was making a goddamn mess with the water he was whipping around. It was impressive since Telfair Square didn’t have a fountain like many of the other historic squares. From what he could guess, Calder had cobbled together his endless wall of water from the various drink stations, bottles of water everyone had been carrying, and even from the ground.

“Lucien!” Calder shouted with what sounded like equal irritation. “I’m trying to keep the people at bay without killing them. Can you say the same?” Even as he spoke, a seven-foot-tall wave that looked almost like a hand swept in, cradling three people as they nearly stumbled into Lucien’s wall of flames. The watery hand safely carried them to a separate path out of the square and set them on their feet again.

Yeah, maybe his flames were better at offense than defense if they weren’t actually trying to kill a lot of people, but they were keeping Grey safe.

“The point is to keep Grey safe so he can work!”