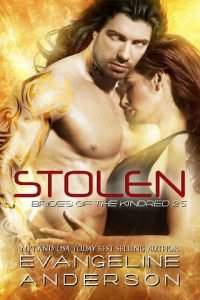 The Cruel Father looked down upon his creation…and was severely displeased.

His universe had been corrupted. His Kindred, the Kru’ell Ones, had been tainted by love…by compassion…by tenderness and mercy. All those womanly emotions he so despised and had taught his children to despise as well.

He had created the Kru’ell Ones to rule over females. To take them as concubines to feed their emotional appetites and then discard them, as easily as a man drops a used tissue. But now, what did he see when he looked down upon them?

“They have taken mates,” he growled to himself, glaring with his all-seeing eye upon the gray-green version of Earth which resided in his universe. The new Overlord, Kane, had taught the other Kru’ell Ones to revere females and treat them with respect. He had purged the hate from their hearts and fostered love instead. He had taught them to take females as mates instead of disposable concubines and to form a permanent bond with them.

It was unbearable! And the Cruel Father knew exactly who to blame.

“Mother of All Life,” he growled to himself, thinking of the Goddess who was his counterpart in the parallel universe which ran along side his own. She had done this thing. She had interfered in his territory and had brought her disgusting attributes of love and fidelity, spreading goodness and peace wherever she went like a pestilence.

The Cruel Father raged to himself. How dare she meddle in the affairs of his ‘verse? How dare she bring her sickening love and kindness into his territory?

And how could he repay her deed in kind?

Luckily, the Mother of All Life was not the only one who had a stronghold in the enemy’s territory. Long ago the Cruel Father had waged war across the dimensional divide with the female deity. He had been forced back, but not before he had left a small token—a scion of himself—within her domain.

Of course, the Goddess had instructed the ancient First Kindred to hide the relic—the Eye of Ten’gu they had called it. And so they had buried it deep, hiding it in the far recesses of their universe on a planet so icy and inhospitable they were certain no one would ever find and awaken it.

The Cruel Father reached across the divide, using just a tendril of his power— not enough to sound any alarms—and touched the Eye. For millennia it had lain dormant, his scion sleeping in endless, dreamless slumber.

“Awake,” the Cruel Father called to it. “Awake and claim your birthright. Decimate the Goddess’s ‘verse as she has ruined mine.”

He felt the Eye tremble…perceived that his scion was rising from the sleep which had claimed him when the First Kindred had buried the relic so long ago.

It would take some time for his scion to come fully awake—some time before the Eye opened and understood what he must do. But the Cruel Father could wait. After all, was revenge not sweetest when it took some time in coming?

“You will be sorry, Mother of All Life,” he growled to himself. “I will teach you not to meddle in my domain. You have turned my own Kindred into sniveling female-lovers like your own. We will see how well you like it when your own children are corrupted by my darkness. When the Eye of Ten’gu opens, your ‘verse will know pain and discord as it never has before.”

This he vowed. And then he sat back to watch as the events he had set in motion began, slowly but inexorably, to unfold…

Far from the Cruel Father’s universe, on First World, Nadiah woke from the dream with a gasp of fright.

“What?” Rast, the Challa of First World, the home planet of the Kindred, sat up in bed beside his mate. In the dim light of their bedchamber, he saw that Nadiah’s blue-green eyes were wide with panic.

“The Eye…” She was nearly panting with fright. “The Eye is waking but it must not open!”

Another male might have shaken his mate to bring her out of what appeared to be hysteria but Rast had a better solution than that. He spread his great, feathery wings—the ones that had grown when he had proven that he was truly meant to be the Challa of the Kindred home world—and enfolded his wife in them.

Nadiah came to him at once and Rast could feel her trembling against his broad chest as he poured healing warmth into her through the enfolding feathers.

“What is it, sweetheart?” he murmured, stroking her golden hair and holding her close, trying to comfort her. “What’s wrong? You must have had a nightmare.”

“N-not a n-nightmare.” Nadiah’s teeth were still chattering in fright. Rast held her tighter, disturbed. He had never seen his mate so upset before.

“If it wasn’t a nightmare then what was it?” he asked gently.