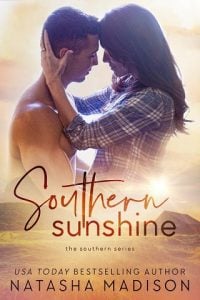 I know that you will be one of the most beautiful chapters.

"I can’t believe you’re leaving," my little sister, Harlow, says from beside me.

With a laugh, I look over at her. "You already came in and measured my room for your glam room," I remind her, and she rolls her eyes.

"Yeah." She crosses her arms over her chest. “Until Mom found out and started crying about her baby leaving." She shakes her head and fake vomits. I have this sudden twinge in my chest when I think about not being here anymore. "It’s annoying. They still have me."

She turns and walks back into the crowd of people. We are at Amelia’s bar celebrating Asher becoming a cop and me leaving. "There he is," Quinn says, putting his arm around me to slap my shoulder. He’s my older brother, and he followed in my cowboy father’s footsteps. It made following in his footsteps almost unbearable, especially since the last thing I wanted was to be on a farm. "Have you been drinking?" he asks, smelling the whiskey on me. "You aren’t even twenty-one." He smirks. “I’m telling Mom."

I shake my head, smirking back at him. “She was there when Grandpa gave it to me." I puff out my chest and fold my arms.

He groans. “Is she still crying?" He looks around the bar to see if he can spot her. “She called me all week to tell me that she misses me.” He puts his head back and exhales. “I live five minutes away from her." Grabbing his bottle of beer, he brings it to his mouth. “All kidding aside,” he says, “you stay fucking safe out there." He stands taller at six foot four to my six foot two, and where he is blond with blue eyes, I have black hair with blue eyes.

"I’ll try my best," I say, and he hugs me. “See you tomorrow morning." I know he’ll be at my house for the big breakfast my mother makes.

The rest of the night is spent saying goodbye to all my family. Lots of tears from some and then smiles from the rest. "Tonight was good,” I say, sitting at the bar watching Amelia and Asher clean up. Usually, I would be helping, but I gave up the job two weeks ago. "I mean, I got more lovin’ than I’m used to." I look over at Amelia and wink.

"Okay, big boy, time for you to go," Amelia says, putting down the rag she’s using to clean the bar.

I look around the empty bar, and all these emotions are hitting me. Emotions I’m shocked to feel. "Where the hell is Hazel?" I’ve known Hazel my whole life. Our grandfathers were even friends when they were in high school. Since she started working here a couple of months ago, we have been getting closer, but she is leaving for college in two months.

"She took the night off," Amelia says, not looking at me. “It was supposed to be just family and friends tonight. She didn’t want to impose, so I gave her the night off." The disappointment hits me more than I expected it to.

I tap my finger on the bar. "Okay, I’m out. See you all tomorrow.” Getting up, I walk out of the bar.

The hot air hits me right away. I start to take the path I’ve taken for the past two months that leads straight to Hazel’s house. I take my phone out of my pocket and text her.

Me: Where are you?

I wait for her to answer me, but all it says is delivered. I finally get to the clearing and see her house is all dark. Usually, her grandfather leaves a light on for her or waits up for her on the porch. This time, though, everything is off, but I still make my way over to her window. I don’t know if it’s the fact I’m leaving tomorrow or if it's the whiskey in me, but the urge to see her is strong. I pick up a little pebble and toss it at her window, missing it by a mile but hitting the wood.

I duck down in case her grandfather hears the noise and gets up to chase me with a shotgun. I think about picking up more rocks but then decide just to call her. Pulling out the phone from my pocket, I call her, and she answers in a groggy voice after the second ring.

"I have caller ID, Reed,” she says, and I hear the rustling of her covers. “What time is it?"

"A little after midnight," I say, looking up at her window. “Why didn’t you come to my party?" I ask.

"I don’t know. I thought it was for family. What difference does it make?"