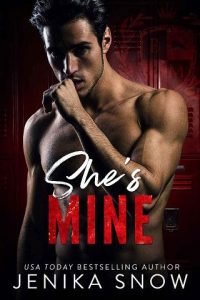 The music was loud, the beat strong enough Keira felt it pump through her veins. The lyrics were obscene, filthy. People stood around getting drunk, some making out on any available surface. And Keira knew others were upstairs having sex.

Just another party at Alistor Barrington’s house, or so she’d heard. This was the first time she’d ever attended one, and to say it was a culture shock was an understatement.

Keira didn’t know much about the twenty-one-year-old aside from the fact that he was an ex-football star turned IT guru. She’d only seen him a handful of times in town, and he was always with his best friends, Ahren and Mykel, brothers who attended Black Mountain Academy with her.

And speak of the devil.

She could see Alistor through the throng of people who parted. He stood off to the side with a beer in hand and laughed at something, his steel-blue eyes a sharp contrast to his black hair and tan skin. If she was into guys like Alistor, he might have done something for her, but he was too much of a pretty boy for her. Besides, she was so far down the social totem pole she wasn’t even a blip on his radar.

As she looked around at all the people, feeling even more out of place, she spotted Nathaniel Black. Bad boy. Head of the swim team. And no doubt the richest asshole at BMA, given the fact that his family founded and built the damn school.

As Molly wove them through the crowd, Keira couldn’t help but realize this party was like some kind of open venue, more like a club than a place of residence. The exterior screamed money, more than Keira would ever see in her life. And the interior was just as lavish.

Why did I agree to go to this party again?

Keira gripped onto Molly’s arm as they continued to move through the thick throng of people. She recognized a lot of them, mainly seniors and juniors from Black Mountain, but there were some sophomores thrown in. The rest had to be from out of town or in college.

Rap music blasted throughout the house, the guy rapping about bitches and hos filling her head in loud, angry lyrics. Keira couldn’t help but cringe. She’d never been one to listen to this type of music before, and she found the crude language on the obscene side. But clearly her introverted lifestyle was the oddball out in this situation, seeing as everyone who wasn’t drinking or all but having sex were dancing and singing along.

She’d never felt more out of place or “nerdy” than she did right now.

When she agreed to come with Molly to Alistor’s party, it had been more of an impulse, something new… something to get her out of the house. She honestly didn’t think her best friend would make her follow through with it.

“Is Ian coming tonight?” Keira had to practically scream over the music, but either Molly didn’t hear, or she didn’t want to talk about it, because no response came.

Since the fifth grade, Keira and Molly had been inseparable. Then Ian had moved in next door to Molly, and the three of them had become this platonic throuple. Now seniors at BMA, Keira felt the three of them start to grow apart as they prepared for college. Although Keira knew that was the normal, natural way things worked, she couldn’t help but feel that twinge of disappointment that she’d be losing a part of herself once this year was up.

“This is great,” Molly called out over her shoulder to her, a huge grin on her face. She faced forward before Keira could respond, and kept dragging her through the crowd. This was Molly’s scene, for sure.

The activity. The chaos. Molly thrived on it, being an extrovert.

Keira shriveled up at it, being an introvert.

“What about Ian?” Keira shouted again, and Molly looked over her shoulder for the second time, her lips pursed as she shook her head.

Okay, so there was obviously something going on between the two of them, something Molly wasn’t going to divulge.

The smell of beer, sweat, and something far more sexual in nature permeated the air.

“Come on, let’s get a beer,” Molly yelled again and pulled Keira more quickly through the crowd.

They reached the kitchen and stood with several other people as they waited for a drink. Aiden Santino stood at the keg, filling up red plastic cups and handing them out. He gave Molly one first, then one to Keira. It was clear he was already drunk by the glossy, red-rimmed look of his eyes. He also stunk like a mixture of booze and vomit.

Keira wrinkled her nose as she looked down at the amber-colored liquid sloshing around in the plastic cup.

He gave Keira a sloppy grin and a wink then moved on to the next person waiting for one.