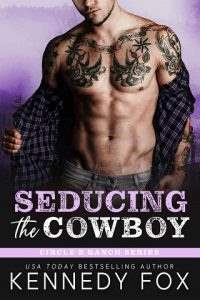 I stare at the empty glass of whiskey sitting in front of me. I’m the only person in the bar besides the owner. Some sad-ass country song plays on the jukebox, and when I glance down at my knuckles, I see the broken skin and red beads of blood pooling on the surface. I wipe it on my jeans, numb to everything that went on this evening.

“So are you gonna tell me what happened?” Of course Benny notices. He’s in his late sixties and has run this little hole-in-the-wall since before I was born. My dad used to come here when he was my age. If he were alive, I'm sure he’d say it was the only thing in this town that hasn’t changed.

“No.” I’m not usually a man of many words, and tonight is no different.

He grabs the bottle of Wild Turkey 101 and pours me another drink—neat, just the way I like it. “This one’s on me.”

“Thanks,” I tell him, biding my time because I know the sheriff is on his way to my mom’s house. He might’ve just arrived.

Tonight, all the pent-up anger I’ve held against my stepdad finally snapped, and I did what my mother has begged me not to do a million times—decked him right in the face. And I’d be lying if I said it didn’t feel good.

Actually, it was better than good. It felt fucking great.

For years, Stanley has physically, mentally, and emotionally abused my mother. I’ve offered to help her leave more times than I can count, and I brought it up again just an hour ago. Her answer never changes.

After Stan picked his tipsy ass up off the floor, he called the cops. Everyone in this town knows he’s a piece of shit, but the law is the law, and I hit him first. Instead of waiting at the house for the cuffs to be slapped on my wrists, I decided to go out and get a drink to help me calm down.

“The same,” I explain, not wanting to think about my cheating ex. I take a long sip, the alcohol burning on the way down.

I should’ve known better than to pursue a relationship with someone I worked with. For some reason, I thought what we had was different. It wasn’t. Last Friday, I found her fuckin’ James in the back of his truck. Now, whenever I have to look at her, I’m reminded of what she did and how badly she betrayed me. “Every day’s a reminder that I wasn’t good enough and never would be.”

“Oh, it is. Not everyone is destined to get married or start a family. Pretty sure there’s nothin’ left for me in this shithole of a town.”

He looks at me over his glasses. “Then why are you still here?”

His question crashes into me the way my fist slammed into Stan’s nose. I open my mouth before I can put my thoughts to words, then close it.

“This shithole of a town will always be here, Payton. Doesn’t mean you have to be. Your mama ain’t gonna leave Stanley. The woman you thought you’d marry slept with every ranch hand in a twenty-mile radius. And you’re still here, hangin’ on to hope like something’s gonna change. It won’t. Trust me. I’ve been here for sixty-eight years.”

I’ve worked on the family ranch for over a decade, probably longer if you consider all the summers I put in during high school, but that means nothing to Stanley or my mother.

Before I can respond, Sheriff Landau walks in. He sits on the empty stool next to me and sucks in a deep breath. Benny opens a glass bottle of soda and sets it in front of him.

“You know why I’m here,” he says, staring forward before turning to look at me.

“No. Not this time. But Stanley doesn’t want you back on the property.”

My jaw clenches tight. “And my mother?”

He doesn’t say anything.

I pound my fist on the bar. “She took his side again, didn’t she?”

“I’m sorry, son. I wish I had better news.” He clears his throat. “Stanley said your things will be on the porch waitin’ for you. I’d suggest you let me go with you so there aren’t any more altercations. The old fool said some disturbin’ things, and I don’t trust him.”

“Payton, you know he has guns. They’re goin’ down to file a temporary restrainin’ order on you first thing in the mornin’. I know this ain’t fair for him to be runnin’ ya off, but since the house and property are in his name, there ain’t nothing I can do. Legally, he can say you’re trespassing if you refuse to leave.”