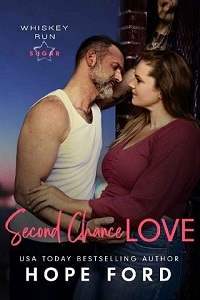 I pull through the gated entrance and wave at the security guard as I drive by. Looking at the non-descript building in front of me there’s no indication of the goings-on inside. You can't look at a building and know about the blood, sweat, and tears that are poured into it, and that's exactly what Walker, I, and the rest of the team have done with our business. This building, on the edge of Whiskey Run, houses the elite Ghost Team. We are all ex-military mercenaries that help people. We travel all over the world, wherever we’re called and save those that need it and then are out before any credit is given.

Thinking of all of the missions that I've been on the last several years, some of them stick out more than others, but every one of them was important. Every one of them made a difference. Knowing that makes what I’m about to do even harder.

I get out of the car and walk slowly into the building already dreading the conversation that I know is coming. I stop at the front desk and Brook, Walker’s wife and assistant, looks at me in surprise. Usually, I'm in a rush and wave a hello as I go by. So when I stop, she glances up to me. "Hey, Nash! You okay?”

"Great," I murmur to her as I walk past and then knock on Walker's door. I hear him say, "Come in" and I take a deep breath while pulling back my shoulders before pushing open the door.

"Hey man, what's up?" he says when he sees me. Walker is more like a brother to me. He is the one that financially set this whole thing up and brought me on. In the beginning, I went on every and any mission that I could. Even when I wasn't necessarily needed, I still went.

It's like it was in my blood, the need to save people and make a difference. I had to prove myself. When I married Emery, I should have settled down and stayed home more, but I didn't. And even though she told me over and over that she wasn't happy, I never fully grasped that, and it wasn’t until she served me with the divorce papers that it hit me and I knew I had fucked up. For almost a year now, we've been apart. It's been the worst year of my life. I know I have to change things, and it all starts right here in this moment.

My lack of response has Walker looking at me with his arms over his chest. "What's going on, Nash?"

Walker's eyes widen as he stares back at me. He knows exactly what I’m saying to him. It’s only two words, but he knows. I've told him over and over that I'm going to get Emery back. And he knows what I’m going to have to do to do it.

Walker repeats what I said. "It's time?" But he asks it as a question instead of a statement.

I nod. "Yes. I'm going to need to step back. No more missions for me." The truth is in this past year, I've cut back a whole lot. I've only gone when it was absolutely necessary and there were lives on the line if I didn't.

But now we are at a point where we are fully staffed. We can promote some of the guys to take over some more, and I can put 100 percent effort in getting Emery back. It's exactly what I should have done before the divorce went through.

I rear back in surprise. "You're okay with this?"

Walker leans over, putting his hands on his desk, and looks at me. "Maybe last year, I wouldn't have understood, but now that I have Brook, I completely get it, and we're going to make this work. You are still a partner in this company and always will be. You've put in your time, Nash. Hell, you've put in the time of three men. It's time you get what you deserve."