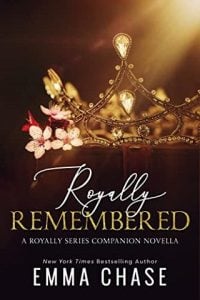 (Two years after Royally Yours)

“I had a second child, after Thomas—a daughter. Did Nicholas ever tell you that?”

“I DON’T WANT TO HAVE any more children,” my wife says.

Grief is bottomless. An endless chasm of anguished yearning for all that could have been, should have been. For more time, more memories. For just one more moment.

I didn’t understand that until now. When we lost my brother, I believed that would be the most acute pain I would ever feel. The aching helplessness of watching him waste away, knowing that when he was gone he would be gone forever.

But I was wrong. There is deeper agony.

We buried our daughter today. In a small satin dress and her favorite fluffy blanket.

The service was a spectacle as royal funerals always are, with press and pageantry and miles of black-shrouded mourners. So much pomp and circumstance for such a tiny box. We walked behind her through the streets of the capital—Lenora and I, Miriam, and little Thomas. Before Nanny put Thomas to bed, Lenora kissed his cheek and I patted his head and we told him how proud we were that he had walked the whole way. That he had done his duty as a prince and he had honored his baby sister so beautifully.

And now we lie here, side by side, staring at the dark ceiling above our bed, still wearing our funeral garb because we’re too worn out to change.

Lenora turns her head to me, and I can feel her surprise before I read it on her face.

“You thought I would disagree?” I ask.

Her voice is curious and soft. It’s not Her Majesty the Queen’s tone—commanding and stern. This voice is for my ears only.

She feels the loss of our daughter in a keenly excruciating way I can’t really comprehend. Because she carried her in her body. Felt her grow, knew her kicks and hiccups long before I was ever able to hold her.

And after . . . after we knew she was ill, after the doctors told us there was nothing else they could do—Lenora still hoped. Still thought they were mistaken. Still believed fiercely as only a mother can. Still kept her faith that our daughter would recover.

And I couldn’t bear to take that from her. To crush her that way.

I will never not loathe myself for that.

Because when the end came, when the final goodbye was upon us and we held her in our arms as her breathing slowed and slowed, and then stopped—Lenora was unprepared. Blindsided. The devastating shock of it took a piece of her that will never be made whole, wounded her in a way from which she will never fully recover.

“You could’ve died when you gave birth to Thomas,” I tell her. “With Evangeline, it was worse.”

It hurts to say her name. And I hate that.

The memory of your child isn’t supposed to gut you. There should be delight at the thought of her tiny, perfect face, her little toes, her chubby hands, the way her eyes lit up when she saw us. Her eyes were pale green, but I think they would’ve lightened all the way to silver. She would have had her mother’s eyes if she had more time. If she had lived.

The ifs hurt too.

She nods, her features pensive. She’s still so young—only twenty-four—and in some ways even younger than that. In time, she may change her mind about this and if she does, I will do everything I can to dissuade her.

It’s selfish of me. But I have made peace with the fact that when it comes to this woman—her heart, her mind, her body—I am a greedy, selfish man.

“Dr. Abbott said there’s a pill I can take. Though the Church says it’s a sin.”

“I’m willing to take our chances that the Church is wrong. Wouldn’t be the first time.”

Because in all the times and ways we’ve touched and tasted and given each other pleasure, there are still certain words that don’t come easy to Lenny. It’s utterly endearing.

She closes her eyes, shaking her head, her lips pulling into an exasperated smile. And then she chuckles ever so gently.

It’s the first time she’s laughed in months. And it is everything.

“Just to make me blush.”

I sweep my thumb across the sweet blush.

“Every chance I can.”

Lenora gazes at me, quiet for a moment. Heavy, glistening tears well in her eyes and her voice cracks.