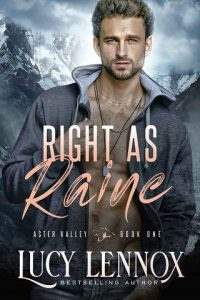 “Raine!” Coach V.’s bark was as familiar to me as the sound of the crowd cheering on a Friday night or Saturday afternoon. The problem was, this time the sound was muffled by thousands of gallons of blood rushing through my ears. I could have sworn I felt my heartbeat in my brain.

“I’m fine, Coach,” I mumbled. Only, it sounded like “Mah fo” for some reason.

“Like hell you are. Q-bie! Get your ass over here with the med kit and some glucose. Raine’s bonked. Again.”

I wasn’t sure bonked was a term used in football, even at the pro level. But then again, I was a rookie. What the hell did I know?

I turned on my side and dry-heaved. Coach Vining squatted down a safe enough distance away to avoid any vomit, but close enough he only needed to hiss for me to hear him. “This ain’t peewee league no more. Your coach told me you had a problem forgetting to eat. Remember we had a little conversation about it when I recruited your sorry ass?”

I tried to say, “Yes, Coach,” but it came out as more dry-heaves.

“So we had a conversation, you and me. And I told you to get your nutrition in order. Hell, I even suggested you hire a professional meal service or some shit. You remember what you said?”

I coughed and rolled back to my back. The scorching heat of the turf against my sweaty jersey was reassuring. It meant I was alive and still in Houston busting my ass for the Riggers. Playing for the NFL was a dream come true, but right about now I would have given my left nut for a different dream.

“Damned right you did. You said you’d handle it. And here we are only four games into regular season and you’ve passed out three times already from low blood sugar. What the hell you eating, son?”

He didn’t give me time to answer before he continued.

“Whatever it is, it ain’t enough. Pro ballers have to eat a minimum of four thousand calories per day. You know this. And if you don’t, you’re even more of a dumb shit than I already thought. So here’s what we’re gonna do. One of my boys has some kind of nutrition degree and knows how to cook healthy. You’re going to find someone like that who knows what’s what and hire them to keep your body fueled like a goddamned pro baller. You got me?”

I thought of his four grown sons. One had played football for Alabama, one for Clemson, one for UT, and the other had wrestled for A&M. They were hard workers, and all had big, muscled bodies. Hell, one of them currently played for the Bengals. If Coach wanted me to consult one of them for nutrition help, I would do it.

“Richie?” I asked, thinking of the wrestler. He probably had the most experience in managing his nutrition, but he was a mean fucker—always spouting off about fairness but only when it cut against him.

“Nah. My youngest. You met Mikey at the WAGs dinner before preseason.”

Fuckin’ A, I’d forgotten. Coach had a fifth boy. A little runt of a guy with nerdy glasses and dark, messy hair. He was the opposite of a ballplayer. The kid had looked like he’d been plucked out of a riveting lecture on the periodic table to come to the friends-and-family thing.

Coach shrugged. “Nah. He’s a gopher. I only said find someone like him who knows about nutrition and cooking for athletes. Not him, though. He works for Bruce as an errand boy. Someone like him. You got me?”

Q-bie had come racing back from the sidelines and was busy sticking me with an IV to push his magic fluid. Within a few moments, I was well enough to sit up.

“I don’t need a chef,” I muttered. “I need a bodyguard to keep the media away from me.”

I was the first out player in the NFL who’d made the starting lineup. Since I’d been out since high school, there’d been no way of putting that Genie back in the box, even if I’d wanted to. Which I hadn’t. The Riggers had known I was gay when they’d recruited me, but my stats made me downright irresistible. If they hadn’t drafted me, someone else would have. I was a Heisman winner, and that trumped sucking dick any day of the week.

Coach narrowed his eyes at me. “Then get you one of them, too. Just fucking get your shit together, rookie. And remember what I told you about earlier. This ain’t the time for any of that crap. No dating. Just football. A lot of us are counting on you. Understand? We need you to stay focused.”

The reminder wasn’t necessary. Football was everything, and I had no plans to fuck it up with any kind of media attention if I could help it. My goal was to lie low and concentrate on being the best damned wide receiver in the league. As my dad always said, “The rest of it can wait. Football can’t. You’re only in prime shape for a small window of time. Make it count.”