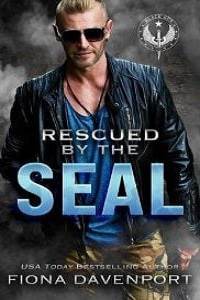 I pulled my motorcycle into one of the narrow spots in front of the bank and kicked the stand down before killing the engine. After removing my helmet, I glanced at my watch to make sure I had the time right. It was a little after two, which meant Cora had been at work for a few hours. Arriving at the same time she did seemed a little too obvious.

I told myself to leave, to man up and stop pining for what I couldn't have like a pussy. But I continued to sit there on my bike until the irrational side of me—the one that needed a hit—won out. I quickly dismounted from my bike and pocketed my keys before striding over to the glass doors.

When I entered the bank, a blast of cold air hit me, but it did little to cool the burn building inside me.

Cora Davis—the star of all my dirty fantasies since she moved to town a year ago—stood behind a counter, smiling at the customer in front of her. I suppressed an irritated growl. It was completely insane, but I didn’t like when she smiled at other people. I wanted every one of them all to myself.

She pushed her long, straight copper hair over her shoulder, and her amazingly unique eyes—one green, one blue—sparkled. I could’ve dropped onto a chair and stared at her all day even though I already had her heart-shaped face, cute little button nose, and deep dimples memorized. Not to mention all the other features of her curvy body.

From my vantage point, I could only see her slender shoulders, her full, round tits, and a small amount of her torso. But behind the desk was a small waist that flared out into curvy hips, thick thighs, and legs that went on for miles. Cora had the body of a pinup girl from the 1950s.

A male voice startled me from my intense focus on Cora. Fuck. Nobody ever snuck up on me. I was always aware of my surroundings, but this girl...this was what she did to me. Which was one of the many reasons I had to stay away from her.

I glanced to my left to see a big, muscular man dressed in black and sporting his permanent scowl. There was a hint of surprise in his eyes that only someone who knew him well would have noticed. If he’d been a normal person, his face would have been full of shock at my carelessness.

“Cash,” I greeted him with a handshake.

When Cash and I were in the Naval Academy together, we discovered we lived in the same town. But it was a big place, and we resided on opposite sides, so we’d never run into each other. We’d both gone into Navy Special Ops and ended up serving as operational SEALs on the same team.

“I‘ve seen you here quite a few times lately,” he commented. Though his expression didn’t change, his tone was curious.

This branch happened to be way out of my way, so his question wasn’t without merit. However, I had no intention of admitting to the real reason I’d driven twenty minutes to a bank that had a location five minutes from my house.

“Visiting a friend,” I answered cagily. It’s not a lie. I considered Cora a friend—granted our “friendship” consisted of flirting at the bank, a few hellos in passing when I needed a fix, and “accidentally” bumping into her somewhere.

Cash’s gaze drifted toward Cora, and my instinct was to threaten him to keep his eyes to himself, except he showed no interest beyond curiosity. So I managed to quell the urge and beat back the green monster that had spawned inside me the day I met Cora.

He didn’t say anything about her when he looked back at me, and I mentally thanked him for being an incredibly private guy. Because it meant he didn’t pry.

“Poker is scheduled for Tuesday,” he said, changing the subject.

“Hooyah,” I responded, my mind already wandering back to Cora.

He echoed the Navy expression, then lifted his chin in farewell before exiting the building.

Cora’s line was dwindling as the last of the lunch crowd headed back to work.

The other teller said something to my g—to Cora—and then closed her window and went into the back. This was another reason I’d come in the late afternoon. The tellers rotated through their breaks after the midday rush.

My feet had a mind of their own, and they walked me over to stand behind the other customers. Since she was alone, I didn’t have to worry about making it to the front and being forced to go to another window. And demanding to see Cora would shed some light on my obsession with her, and that simply couldn’t happen.

These visits were all I allowed myself. A chance to be near her without the danger of losing control and either taking her to the floor or just grabbing her and making a run for it. And they made my fantasies so much more realistic when I had a fresh picture of her in my mind.