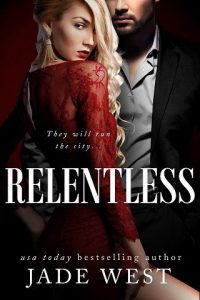 For all the weirdness in my life, nothing felt weirder than waking up in bed next to the man I’d grown up believing to be my worst enemy. Weirder still was being madly in love with him. It was insanity. I was consumed by the crazy devotion I felt for Lucian Morelli.

It felt even more bizarre for the fact there was a body buried in the backyard and I felt happy about that. Relieved about that. Loving life with a passion I thought I’d never feel.

The Morelli monster had killed the monster who’d abused me all through my teens. He’d killed Reverend Lynch. For me.

Yes, I was consumed by the man.

It was early morning. The light was barely showing outside. I snuggled up closer to Lucian and took a breath, enjoying the steadiness of his.

He was a deep sleeper. Beautiful.

I don’t know how long I lay there at his side before he moved and turned towards me. It felt like hours of perfect bliss, but in reality was barely more than minutes. The light was shining brighter outside, but not by much. The day was still only just beginning.

Lucian’s arms were around me before he woke, holding me with the kind of strength that made my heart sing. He was possessive, even in a dream state.

His eyes focused on mine just as soon as he opened them.

Neither of us moved. Our faces were barely inches apart, breaths matching. His heat was divine.

It was him who broke the spell. “I have no idea how the hell we make this work, Elaine. The very second anyone finds out about this they’re going to come for us with everything they’ve got. We’re dead and buried.”

I knew that. I had no answer. All I knew was that I’d do anything and everything I could possibly do to give us even the slightest chance. That wouldn’t make any difference. Nothing could stop the truth. We were in danger with every passing second.

Out there in the big savage world beyond Kington Peak, and the quaint little shack we were holed up in, our families were part of one hell of a war.

Only now the Power Brothers were up against the Constantines too.

Blamed for my disappearance and kidnap.

Yeah, it would be getting seriously damn bad out there, and if anyone should find out that it wasn’t the Power Brothers who had taken me from my NYC central apartment… that it was Lucian Morelli I was with…

My thoughts were chaos.

I had nothing to say, so I didn’t say a word, just kissed him.

That was the only answer I had to give.

I kissed the beautiful monster, and he kissed me back. Hard. Really damn hard. Love and lust are a heady combination, an ocean more welcome than thoughts of our doom.

His hands pinned mine above my head and he ravaged me, flesh to flesh. My legs parted and wrapped around his waist and his movements were raw. Fierce.

I was still sore from where he’d taken me the night before. He’d played me like an instrument into the early hours of the morning, teasing, tempting, hurting. Loving me.

I was more than ready for him when his cock pushed inside me on a fresh new day. My moans were as raw as his thrusts, my hips pushing back up to meet his.

We were still in the rhythm when his cell started ringing from the dresser. He ignored it.

It sounded out again. He ignored it, but I felt him flinch. I knew he was hearing the danger as loud as I was.

He hit the spot just right inside me when it sounded out again and I was coming for him, just as they were out there coming for us. I was squirming under him while he slammed, slammed, slammed, but it was more than the want. It was fear that had my pulse racing along with my desperation for the man I loved.

He came at the height of my crescendo, breaths ragged when he let his weight crush down onto mine. His cell sounded out again and we were both feeling it. Both scared.

It terrified me even more to sense Lucian’s fear than it ever would to feel my own.

“Are you going to get that call?” I asked him.

“I’m going to have to very soon.” He rolled off me with a sigh and took my hand. “That was a lovely distraction but we really are fucked, you know. Hopefully your family and the Power Brothers will wipe each other out fast enough to avoid finding out the truth. That it wasn’t the brothers who took you at all, they’ve all been played for fools.”

His eyes spoke more than words. Heavy. “We both know that’s not going to happen,” he told me. “We’re in serious fucking danger.”