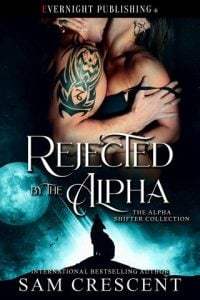 Misha Parks stared up at the full moon, wondering if any of the wolf guards were looking down on her, mocking her. Would they give her advice? Tell her what to do? She liked the idea of someone caring. Someone looking down at her and wishing her well. Everything in her life told her that she was so way off base. There was no one out there looking down on her.

From the time she was a baby, she’d been alone.

She had no idea who her parents were as she’d been abandoned in a forest after being alive for just a couple of weeks. The Masters pack had taken her in, and she’d been put in their special brand of a foster system.

The abandoned children shared a house, and each adult member of the pack took turns sharing the responsibility of caring for them. So noble. Some of the people were amazing. She couldn’t deny they tried to make them feel welcome. Of course, with all packs, there were also people who made them feel like scum and would rub it in that no one wanted them.

Growing up, she had more good memories than bad ones.

No one knew her parents. She possessed wolf DNA though, that was clear.

Running her fingers through her hair, she lifted her knees close to her chest and didn’t move from this spot.

At the age of eighteen, her life had changed forever, in some good ways and some not so good ways. The good ways, she got to finally feel her wolf. For so long, her beast had been close to the surface, randomly wanting to spill out. It was a rare case for a person’s inner wolf to come calling, but she had gotten it.

Finally feeling the full moon on her back as she ran out in the woods had been incredible. What happened during the following full moon when she happened to be near the alpha, Decker Masters, wasn’t so fun.

Her wolf had recognized him. She didn’t realize what it meant until he publicly rejected her.

Decker, the Masters Pack Alpha, had denied her, and in doing so, rejected her as a mate. He was twenty-four years older than her, but age didn’t matter to wolves. Rejecting a mate was unheard of, especially in the pack she was part of. She’d done some research and knew it was possible for mates to not … mesh well.

He’d never given her a reason. No one had asked why he didn’t want to be with her. She supposed to many within the pack, it was clear.

She wasn’t like other wolf females. From a young age, she’d been blessed with curves. To some, she was a fat wolf, but she loved her curves. She didn’t mind having large tits, full hips, a big ass, and thighs that sometimes rubbed together.

Misha had learned at a young age to accept herself for who she was. It helped that the pack’s healer, Blueberry, had been her mentor. The woman still was, and they were the best of friends.

It was why she liked to run off to the deepest, darkest part of the forest and stare naked up at the full moon. It helped to distract her from the way her body was pretty much humming to be fucked.

She was a virgin and craved her mate. Just because Decker had denied her didn’t mean she no longer felt this warped connection to him. Life was so unfair.

She hated him and wanted him with equal measure.

At least he hadn’t taken on any other female within the pack. There was no lover she had to compete with. Just the thought of him being with another woman was enough to make her stomach clench and to set her nerves on edge. She hated him for making her feel that way.

After a good four hours had passed, she knew it was the right time to leave the forest and to head back.

Getting to her feet, she looked up at the full moon and couldn’t help but feel like it was a traitor to her for some odd reason.

She didn’t bother to go back to her wolf form as she walked through the forest, aware of other members of the pack while they enjoyed the night together. No one had offered to keep her company.

At twenty-one years old, she was growing tired of being in the pack. Just because Decker had rejected her didn’t mean she had a choice in going without male company. Anyone could offer to be with her. He’d denied her and had no right to her at all.