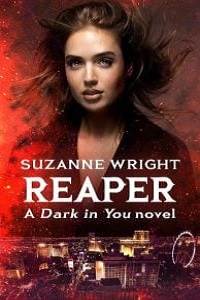 Someone really needed to remind this guy that it was universally considered rude to stare.

Piper Winslow didn’t judge those who gave social etiquette the cold shoulder. She’d been known to snub it herself on occasion. Life was more interesting that way. But there was an essential difference between ignoring social customs and point-blank failing to exercise common decency.

She was pretty sure that this particular reaper was very aware that it was downright disrespectful to oh so blatantly stare at people. And yet, the big bold bastard—who hadn’t said so much as a brief hello to Piper—kept his gaze fixed firmly on her like it was his right. And her middle finger was beginning to twitch.

Flexing her hand around the handles of her shopping bags, Piper did her best to appear unaffected. She strived to instead focus on the other three demons in front of her and drown out the sounds echoing throughout the mall—the mish-mash of voices, the slapping of shoes on tile, the ringing of cell phones, the music playing low.

But an internal voice just kept whispering … he’s still staring at you.

What, did she have something on her face? It didn’t seem likely. Levi’s companions weren’t slanting her weird glances as they chatted with her. Plus, this wasn’t the first time she’d caught him watching her so intently. He’d done it a few times, actually.

If he meant to simply rattle her he was wasting his time. Few things made Piper nervous. Namely wasps, her mother’s driving skills, and sticking a foot out of her bedcovers at night since she’d be irrationally tormented by the thought of Annabelle grabbing it.

Piper might have wondered if she was on the receiving end of an eye-fuck. She knew better, though. Knew for a fact that Levi Cutler wasn’t remotely attracted to her. Piper wasn’t his type—his words, not hers. Words he’d spoken to her stepsister back when he and Celeste had dated six years ago.

It was the first time Piper had ever begrudged the woman anything. Levi … he was a man who made an impact on every level, and he’d for sure made an impact on Piper back then. It really had sucked large to have a thing for her stepsister’s boyfriend, of all people. But Piper couldn’t be faulted for that—she was just an innocent bystander. Mother Nature was to blame for shaping him the way she had.

Tall and unabashedly male, Levi had the powerful build of an MMA fighter. Broad, solid shoulders. Superbly toned arms. A hard, defined chest. Just so much lean muscle that her poor hormones didn’t know what to do with themselves. Every part of him was a weapon, and it showed.

Normally, the whole ‘dangerous and dominant’ thing didn’t really do it for her. Hell, ‘dominant’ seemed too tame a word for Levi. He was an alpha to the core—it came across in everything about him. His unflinching gaze. His self-assuredness. His coolly calm, in-command air. The menacing, animal grace with which he walked. How he stood like a sentry—his head up, his back straight, his feet wide apart.