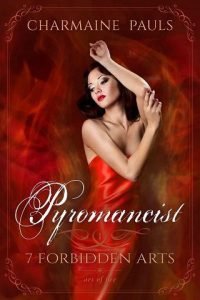 Run, as fast as you can.

He was coming for her.

Clelia d’Ambois woke with a start. Beneath her, the earth was damp. Above her, pine trees had their arms thrown around one another in the light of the moon, the circle of old giants staring down at the intruder with quiet curiosity.

She jackknifed into a sitting position. Snow, her wolfdog, yelped. From farther away, the other three wolf hybrids, Rain, Cloud, and Thunder, howled.

The horizon was already a deep purple. Morning wasn’t far. The pine needles rustled in the breeze that swept through the forest. She shivered, not only because her pajamas were wet from dew, but also because the trees had turned restless as if sensing the danger.

She trailed her fingers over his fur. “How long have I been out here?”

If only he could answer. He trotted to the other dogs that waited on the outskirts, anticipating her command with a wagging tail.

“Home, boys,” she said, getting up and dusting her hands.

The dogs took off in the direction of the cottage, slowing at the top of the hill to make sure she followed. Trailing behind, she mulled over the dream that had accompanied her sleepwalking.

It was always the same. A helicopter circled over the sea, casting a net of ripples over the water while she walked down the jetty like a bug to a windshield. Around her, the forest bordering the island was dark, and beyond it, the village was burning.

The helicopter turned and dipped, no longer circling but with deliberate direction this time. They’d found her. Her heartbeat leapt with the flames as the aircraft landed on the quay at the end of the jetty. The sound of the blades vibrated in her chest.

They rippled the air like a pebble in a pond.

The stink of fermenting seaweed broke through the salty scent of the ocean with every ebb of the breeze. It mixed with the smoke of wood turning into charcoal and the diesel from the boats. The hot carbon dioxide fumes burned her nostrils.

Her senses told her this was real even as her mind screamed at her to wake up. Yet she remained in the dream, standing frozen like a rabbit in headlights as the hatch lifted.

A masculine boot hit the wooden boards of the quay. The tip of a long coat slipped from the seat, revealing the dark shine of the man’s pants. He had to fold his body double to fit his tall frame through the opening. His black hair fell loose to his shoulders, the ends whipping around his face in the wind of the rotor.

Her breath caught as shock slammed into her chest. Even if she’d dreamt it countless times, this part always shook her.

Joss for short. A village and castle were named after the French ancestor whose name he’d inherited. The castle still belonged to Joss, even if it lay in near ruins.

He targeted his gaze on her as if he’d known she’d be standing there at that moment on that day. Rooted to the spot, she watched helplessly as he advanced along the jetty. His coat flew around his midriff in the wind. Powerful thigh muscles bunched as his boots hit the ground. His features were older, but his jaw had the determined set from his youth, and his gray eyes had the same haunted look.

Joss was coming for her.

She didn’t know why, but she knew she had to run as fast as she could.

When the home she shared with her grandfather, Erwan, came into view, she pushed away the disturbing memory of the dream. The fisherman’s cottage stood alone on the French shore of the Gulf of Morbihan, on the Island of Berder, the Breton name that meant The Island of Brothers. It was high tide. The sea had washed up to the stone wall of their terrace. Erwan’s boat was gone. He would’ve left at four in the morning with the turn of the tide.

Their house rose white against the backdrop of the aquamarine ocean and a luminous-green grass hill. It was a simple home with a kitchen, bathroom, shower, and two bedrooms. Around the back, they had a chicken coop for rabbits, hedgehogs, and turtles, a shed for Erwan’s fishing gear, and wooden houses for the dogs. The stray cats slept wherever they could, usually inside, as far away from the wolfdogs as possible.

Snow sat down next to the wild rose bush by the door while the other dogs ran off to the beach. Caressing Snow’s head, she made her way inside. Tripod, a three-legged mongrel, lay in the kitchen on a cushion by the stove. She filled the black kettle with water and lit the gas for Erwan’s tea before laying the table with baguette, butter, and mulberry jam. When the water boiled, she turned off the gas and poured the hot water over tealeaves in a pot. After feeding the animals, she went upstairs to shower and dress.