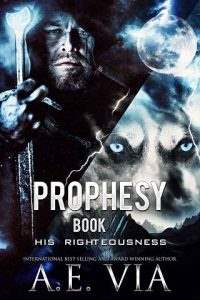 Adres was still miles away from the Alpha Zenith’s pack lands, but with his enhanced hearing he knew they were aware of his approach. Adres had traveled to the other side of the world from his beautiful home in Romania to pay a debt to the vampire king and his second-in-command, the Lord High, Belleron Liatos. King Chadwick Bentley had left his royal palace in Newcastle, England, for the sprawling, wintery White Mountain Forest of the Volkov alphas, a centuries-old generation line that had been blessed by the Mother to protect her coveted children, all wolf shifters.

King Bentley and his court now resided on these sacred grounds with his true beloved, the alpha of all alphas, Justice Volkov. Rumors of the pair’s miraculous mating had traveled far and wide, since there hadn’t been a fate-match between a vampire and a shifter in over a thousand years. Adres didn’t know why the Mother had seen fit to recreate this union now, but he could only assume it had to do with the prophesy that vampires and shifters would one day need to unite again in order to defeat a common enemy. But after years of shamans, elders, seers, and witches predicting this so-called prophesy, no one had seen any evidence of the premonitions becoming reality.

Until a few months ago.

After one of his brothers had gone through a near-death experience, as the eldest Cavalerie, Adres had stood sentinel at his bedside as he recovered. While his brother Andrei healed, his cherished told Adres of the Volkov alpha who had stopped and risked his own life to save one of their kind. With her heavy Hispanic accent, she had told him of the Lord High’s beloved, that he’d shifted into an all-black wolf with flames for eyes. A divinity no one had seen for centuries. She’d described how he’d leapt into the burning building and saved her amado, then emerged from the flames without a hair singed.

If the fire-god had returned, then Adres needed to see for himself. So, instead of getting on a jet and returning to his home after Andrei had recovered, he found himself in uncharted territory.

It was dangerous to breach the Mother’s land without invitation. Any vampire would surely meet his demise within minutes if it attacked. But Adres didn’t come to harm; he came bearing a gift his king would not refuse. When he was close enough for them to scent him, he put up all of his shields to protect his mind and soul from their powers. Adres was well-educated and knew that the Volkov alphas were descendants of the first Siberian dawn wolf, and each of them possessed an energy force that could attack from afar. And, as he moved through the dense forest, he could see a clearing that opened ahead, and just beyond stood his king next to his true beloved, with their army and pack behind them. Adres assumed they could feel how strong he was, though he was blocking them from his true identity.

Adres was still hundreds of yards away, but he was able to see when the vampire king removed his fitted black suit and crouched on his hands and knees. The air shimmered around him, and a sonic boom shook the earth as the king shifted into a massive white tiger.

Adres’s steps faltered. It is true.

Justice Volkov shifted into his intimidating white-and-gray wolf and stood beside his mate. Adres was almost too stunned to continue moving. He thought they were going to charge forward at him as he tightened his impenetrable shields, but neither of them had to move to knock Adres off his feet.

King Chadwick Bentley lifted his large head and released an ear-deafening roar at the same time that Justice pushed his energy in his direction. Together the king and alpha produced a powerful surge that took Adres down to one knee, but not for long. Futu-i! He struggled to his feet, registering their surprise when the Alpha Zenith and the king shifted back to their human forms.

“That should’ve worked,” Justice Volkov said in his deep voice.

“It’s the vampire,” the king answered his mate. “I think it’s only one.”

“Let him move in,” Justice said, glaring into the trees. “No one attacks unless I give the command.”

Adres was glad to hear the AZ announce that. It was said that Justice Volkov’s wolf was the just and fair one, and for Adres’s sake, he hoped that was true. He used his flash speed and emerged through the tree line into the open compound. Beyond him were houses and cabins centered around a sprawling two-story home. The towering trees and deep valleys surrounding their land had made breaching their fortress a difficult journey, but a welcome one. If these had been different circumstances, Adres might have stood and marveled at the beautiful property, at the wonders of nature, but he wasn’t there for a pleasure visit. He had a duty to fulfill.