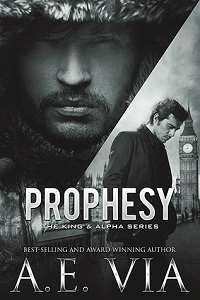 “I’m sorry to disturb you Alpha, but unfortunately, this can’t wait.” Justice lifted his head when his brother and first beta, Alek, came through the door and went straight for the remote control to turn on the television in the den of cabin where he was staying.

If you look behind me, you can see all the mayhem and chaos. It’s a nightmare. Shifters and vampires fighting in the middle of the street. Pedestrians are afraid to walk through here to get to their residences. Businesses are closing early out of fear.

Justice rubbed his hand across his forehead while he listened to the news anchorwoman over-dramatize the events. The recording was on a loop. There were five wolves and three vampires posturing behind her. Between the way the vampires moved with lightning fast speed and the intimidating growls of the wolves, it was understandable humans would be frightened.

“When was this?” Justice asked.

“Last night. The wolves are still in holding cells in Carson City.”

“Send a few pack leaders to get them, please.” Justice kept his anger to himself. It was a rancid odor no shifter liked to smell. When his brother didn’t respond, Justice looked up from his desk. His brother was almost as tall as him at six feet two. Justice’s hair wasn’t as curly as his brother’s and his eyes were an astonishing shade of arctic blue, while Alek’s eyes were a shade paler. A trait passed down from the original pack of Siberian wolves they were descended from. His brother looked uncomfortable. “Spit it out, Alek.”

“The governor of Nevada is requesting to see you personally. He won’t release the shifters to anyone else.” Alek rolled his eyes. “I tried to reason with the man, but he’s being a bit difficult. I told him you were extremely busy, Alpha.”

“This is crazy. I can’t go to Nevada right now. I’m still working with the Secretary of State on getting them to approve our new registration system.”

“It looks like we have no choice. The mayor is threatening to get the National Guard involved.” Alek shook his head sadly when Justice’s head shot up in surprise.

“The National Guard? Alek?” Justice lifted his nose and scented. His brother wasn’t being dishonest, but he wasn’t telling him the whole truth, either.

Alek sighed, knowing he was busted, and opened a thick manila envelope that Justice had paid little attention to. “This is the print-out of attacks and incidents involving shifters and vampires reported in Nevada in just the last eight months.”

Justice growled, making his brother struggle against his energy. His brothers Alek, Macauley, and Taleb were all very strong alphas, but none held an ounce of the power that Justice had. He was careful to lock down his strength when he was around other shifters. Especially alphas. It could make their wolves anxious to feel pushed. Justice took a calming breath.

“All of that happened in only eight months? Why didn’t I know about this?” Justice stood to his full height.

Justice cut his brother off. “Never mind, I just called a meeting.” Justice was able to communicate with all the shifters telepathically. Some were a bit rebellious and would put up blockers or have witches cast spells to protect their thoughts, but if Justice really wanted to exert his full power, none of those things would keep him out. “We need to get this resolved. If it gets reported to the National Guard that I have lost control of the shifters, then the government will try to take them from me. Lock them in cages for years for even the slightest infraction.”

“This could start a war, Alpha,” his brother said seriously.

There was no way they could face another war. It’d been over two hundred years since the last one. It was still used as a teaching tool on what not to do. Whether between shifters, vampires or humans, if they fought, the casualties would be too great on all sides for any species to call it a victory.

“But you want to meet now, when we’re here visiting on another pack’s land? We should not talk politics here, Justice.” His brother continued to voice his concerns as a couple members of his pack came into the room.

“They’re far enough away and enjoying the celebration too much to hear us. Justice raised his nose and took a couple deep inhales. He smelled no one around except the ones he’d summoned – his immediate circle.

Justice pointed to the long conference table next to the patio door and gestured for his pack to take a seat. Justice sat at the head, letting his large frame sink down in the chair. The accommodations while he was visiting the Black Mountain Pack had been top of the line. He was used to packs going out of their way to receive him when he visited. Either for business or pleasure. He refused to stay in hotels. There was no way that his wolf would handle that. He had to be free to shift and roam. He also couldn’t connect with his wolves if he was in the city, twelve stories up.