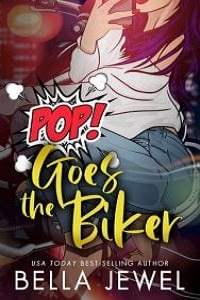 My screams echo through the warehouse as a giant rat scurries across the floor, its long tail and weedy body rushing as it gains on me, coming right toward me with those beady eyes and long front teeth. I can’t move fast enough—it’s like my body won’t do what I’m telling it to, which is get the hell out of there. My screams turn into shrieks as I try to get up on top of the couch before the rat reaches me.

Just as I reach the very top of the couch, popcorn all over the floor, my soda tipped onto the material, the rat stops. It stops and stares up at me, then, oh then, it takes a piece of my delicious, buttered popcorn and starts nibbling on it. Eating it like the ballsy little shit it is, staring at me as it crunches into my snack, my treat. Evil. Pure evil.

“Scat!” I growl, waving my arms around. “That’s my popcorn, you little asshole.”

It just keeps looking at me, unbothered by my show.

It finishes one piece and picks up another.

It’s not going to leave. It’s going to stay here forever, until every last puff is gone and there are nothing but crumbs left in its wake.

“Go home. Go back to your family.”

Speaking of family, a moment later, two other rats appear from god knows where, and join their little friend in a late night feast. My heart is racing, hands shaking, body tense. I hate rats, I hate them with a passion. Mostly because I’m utterly terrified of them. I just moved into this run-down piece of crap warehouse and now I find out it’s infested with rats. Dirty ass rats with nowhere to be but in my space.

I reach for my phone that’s resting on the couch where I was just sitting, enjoying a peaceful night to myself. Something I haven’t had in quite some time. I pick it up, and the rat makes a squeaking noise when I do. “Be calm, devil rat. I’m just getting my phone so I can call someone to come and shoot you.”

It continues nibbling, making some weird hissing noise when its friend gets a little too close and tries to snatch its popcorn.

“What the fuck are you callin’ me at this time of the night for?”

His husky voice is sleepy, and I have no doubt I just woke him from his slumber. Well, too damned bad. That club wants to leave me out here, alone, then they’re going to have to put up with my calls. I know someone is on guard outside, making sure I’m safe, but I don’t know who that person is and I certainly don’t have their phone number. They sit at the end of the driveway; from there, they won’t even hear my screams.

Beckett is the one.

“There are rats,” I breathe, my voice shaky. “They’re ganging up on me and I’m stuck on the sofa. I can’t get down. They’re all around.”

“Fuck me. You are a fuckin’ badass bitch that takes on cartels but you’re scared of a god damned rat?”

“Do you have any idea the kind of diseases these things carry? Have you seen their teeth? I can’t risk my life like that.”

Beckett growls. “I could give two fucks about your rat problem, or you. I’m sure you’ll figure it out.”

“Beckett,” I warn, my voice icy. “If you hang up the phone on me, I swear to god I’ll go and take all the money we’re making and burn it. Do you hear me? I will burn it while dancing around its smoldering ashes laughing hysterically. Do you want that? Do you?”

“Why the fuck are you so dramatic? Fuck. I’ll call Hugh, he’s on watch. He can come chase the damned rats away.”

“That would be appreciated.”

“Don’t call me in the middle of the night again unless someone is fuckin’ murderin’ you. Even then, give it a good ten minutes to make sure they’re mostly done so by the time I get there, it’s too fuckin’ late.”

He hangs up the phone, and I give it a sarcastic expression before tossing it back onto the couch. This makes one of the rats hiss at me.

“Don’t you hiss at me, you little buck-toothed, disease-ridden asshole. You just wait, something is coming for you. Something big. Hopefully a .22 but I’ll accept anything.”

Five minutes later, Hugh walks into the warehouse. He doesn’t have a gun in his hand, which is a bit of a let down, but he does take a look at me on the couch and then down at my rat friends and smirks. “Well, they’re friendly, aren’t they?”