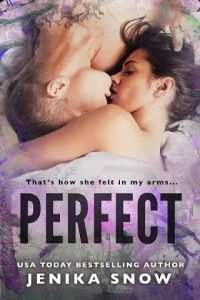 The music was so loud and intense that as Lena Port let herself get lost in dancing, she felt light-headed. Hell, maybe it was the shots she’d had in the car on the way to the club. Being only eighteen meant she couldn’t drink legally at clubs and bars, but she knew how to party.

She opened her eyes, not realizing she had closed them, and saw Rory Jaymes, the love of her damn life. The boy she wanted to marry one day, and the guy who had been her first everything … well, almost everything. Tonight, she’d rectify the fact she was still a virgin, even though she hadn’t told Rory yet. She wanted it to be a surprise, to be something special, even if she allowed herself to get good and buzzed.

One night per month, the club in their city let underage kids stay past ten o’clock, and tonight was that night. So, they all piled into their cars and headed over to the club, making sure to drink enough alcohol before they got to the club to be good and drunk while partying.

It was Friday night, and the underground room beat and pulsed, alive with the bodies gyrating, dancing, and all but fucking each other on the main floor. Lena was by herself although several girls from her school she’d come up with were nearby, grinding on their boyfriends or, hell, strangers even.

The music meshed seamlessly together, going from one song to the next, so not one moment of silence filled the place. Lena started moving her hips to the beat of the song and stared at Rory, feeling her arousal grow.

The lighting was low, and the flashing, neon spotlights made the entire atmosphere more sexually charged. Hell, Lena felt more sexually aware of what she wanted with Rory because of the atmosphere. She’d known him since she was just fifteen years old. Being with him for the past three years, doing all but actual sex that entire time, had been hard for her, and she knew hard for him, too. But despite Rory’s imposing size, the fact he was taller, bigger, and far more muscular than the majority of the guys at school, he was so gentle and understanding with her.

That’s why she loved him more than anything else.

But it wasn’t just that he took care of her and never pressured her into anything she wasn’t ready for. She also loved him so much because he didn’t have love in his life at home. She couldn’t count how many times she’d called him, or even gone over to his house to hear his drunken father yelling at him, belittling Rory with hurtful, disgusting names. She hated Rory’s father, wished things were different for Rory, but she also knew that they were seniors now, and he’d finally be able to leave all of that behind.

She’d be by his side, as well.

Rory was moving back toward her now, this aroused gleam in his eyes, which only made her hotter. He was right in front of her only moments later, his knee between her thighs, the friction and pressure of that limb causing her pussy to become wetter. They may not have actually had sex yet, but oral, touching, hell, almost everything else was open to experience. God, did she like it when Rory touched her.

She’d just wanted to wait to lose her virginity until she was older and really knew what she was doing. She’d always known Rory was the one that she’d lose it to, and that time had come now.

Lena was hot, and not just temperature wise. Her nipples poked through her tank top, her thong wet from her desire for the guy right in front of her. He smelled good, crisp, clean, but spicy from the cologne he wore. Sweat beaded between her breasts, and when she saw Rory look down her shirt, clearly able to see her cleavage and the droplets of perspiration that lined between them, she felt her pussy clench tightly.

She wore a skirt, a short one that showed off her legs. But she was only showing off for Rory, only tempting him.

Rory leaned in, slid his fingertips slowly over her lower back, the part that was exposed as she lifted her arms above her head and danced for him, grinding her body against his. He applied more pressure with his knee right up against her panty covered pussy, applied pressure to her lower back with his hand, pulling her harder toward him, and moved his mouth to her ear.

“Damn, Lena, I want to take you to my truck, drive us out in the middle of nowhere, so that no one can bother us, and eat your pussy out until you come all over my face.”

“You keep talking like that and I’m tempted to go into one of the bathrooms and suck your cock.” Yeah, they both had dirty mouths, but then again, she was kind of drunk and feeling extra aroused since she planned on being with Rory tonight in all ways.