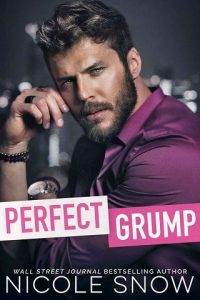 “Reese, you can’t keep blowing money on Millie like this,” Abby tells me over the phone as I’m weaving through busy Chicago traffic at rush hour.

“Um, that last doll you bought her came with a convertible and her own high-end makeup kit. Like, better than we can afford in our non-plastic lives. You need your money. Besides, she’s getting spoiled.”

I toss my head back and laugh.

Maybe she has a point, but I wonder...why complain now?

I’ve been buying my adorable bumblebee stuff for years, and my sister never minded. Why does she suddenly care? It’s not a contest. Everybody wins when you’re lavishing a smiley little girl with gifts.

For once, it doesn’t strain my purse, either.

But I guess that’s what older sister single moms do.

“Don’t worry, sis. I told you; I got a new job that pays. It’s not like the other places stiffing drivers left and right. I’m making ninety-freaking-thousand per year plus benefits. Big girl Chicago money.”

“I think it’s going to be good. I mean, nothing’s ever perfect, but—”

“But? You’re already finding flaws in a job that pays that much?” Abby laughs again.

“Well...so you remember that architect lady I picked up a few weeks ago? The older one who designed that insanely cool cabin-like building on the lake? She basically insisted I come in for an interview to drive for her permanently. I wasn’t expecting much, especially when I found out she’s kind of a big deal...I definitely didn’t expect a job offer. But I got it, and yeah. A woman could get used to not being poor.”

“That’s awesome! But driving downtown Chicago in rush hour?” I swear I can hear my sister physically wince over the line. “Yuck. They’d need to add another zero to that salary if it were me.”

“Oh, Abby, it’s nothing new to me.” It’s my turn to laugh. “I love driving for her. Beatrice Brandt’s an angel with badass wings. Sweet, whip-smart, and classy. Surprisingly down-to-earth for a billionaire artist. She’s kinda like the grandma we never had.”

After a brief silence, Abby says, “Yeah. I guess that’s nice. So all you do is drive her around all day in hell-traffic?”

“Almost.” I swallow at the image trying to invade my mind. A maddening image of a very annoying man who’s built, tall, sexy as sin, and—no. I will not let it in. Not. Today. Satan. “Look, if she was the only person I had to chauffeur around, this job would be paradise—”

“I chauffeur her two grandsons around, too,” I say with a sigh. “One of them is ice-cold, growly, and has an entire tree stuck up his ass. Everybody calls him the Warden—”

“The other guy, he’s...” Even though I’m in a locked town car with the windows up, I look around to make sure no one’s in earshot.

Where do I even start with describing the enigma that is Nicholas Brandt?

How do I explain what happens when ice-cold arctic air impacts a tropical front, and the storm settles into an emerald-eyed beast-man chiseled from pure stone?

“Looks, no. He’s just weird. Hot and cold with everybody he works with, kinda reckless, unpredictable, armed with terrible jokes and brutal pickup lines. With me, he’s also almost too friendly.” I shudder.

“What, he’s trying to coax you into bed so you lose your job? Holy shit, tell me where he lives right now and I’ll show him reckless.” Abby’s tone goes stern.

I giggle. “No, no, not like that. He’s not coming on to me or being gross. You don’t have to worry. The guy’s just...well, oblivious. I think I’ve chewed bubblegum that’s more perceptive than this dude.”

“What does that mean?”

“He won’t leave the privacy screen up whenever he’s in the car. I feel like he’s lonely because he keeps talking my ear off.”

“You don’t get it, Abby. He’s treating me like his confidant because he...he kinda thinks I’m a guy.”

That’s not quite accurate, but it’s close enough.

Definitely not the kind of hilariously one-sided ego monologues I’ve heard since the day my boss slid into the back seat.

“Wait. What?” Abby pauses. “No way. There’s nothing manly about you. Is he blind? Deaf? Both?”

I can’t decide whether I want to laugh or cry at how incredibly stupid this is.