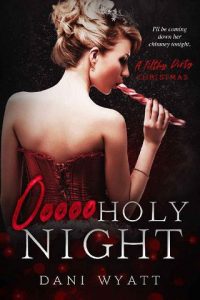 “You’re the reindeer whisperer. You should have a TV show…”

Phil the bar owner rubs the countertop with a white rag, snapping his tongue over his front teeth, which is just one of his annoying habits but he’s likeable, nonetheless.

The ache in my neck doubles as I look around the crowd and spin my half full mug of Guinness in a slow circle.

Santa Got Runover by a Reindeer comes on the jukebox, and I raise a hand to wave at a few locals that are singing out of tune and looking my way.

I mull over how to fix the reindeer paddock back at my place.

The deer were roaming all over the land when I came back with the trailer with the eight I’d used for the sleigh today, and it took me the better part of an hour to round them all up. Empty food troughs, water filled with dirt. Kids don’t come out my way much, and I don’t usually have any trouble on account of my size, but someone got in there and fucked things up but good.

I can’t have shit like that going on. The safety of my deer is my primary concern.

“Another perfect performance,” Phil adds. “Two more to go and it’s another year off for your four-legged friends.”

“Thanks,” I grunt, throwing back the rest of the cool dark beer in an effort to dislodge the lump in my throat.

The chances that she’s already in town are good, but the chance that she might walk through the door of The Frankenmuth Station while I’m sitting here are slim at best. That doesn’t stop the rampant images stampeding through my brain, of her running across the bar, a smile spreading on her lush lips as she sees me. She skip-hops my way, tits bouncing, diving into my lap, hands sweeping around my neck as her lips connect to mine…

“Him? On TV?” Donald, a guy I’ve known since high school who makes his second home here at the bar, says with a chuckle, pulling me from my fantasy. He raises his empty mug to Phil and points to mine before continuing. “Maybe in a horror show. You see that kid start crying today at the parade when ol’ Doctor Doolittle here came down the street?” He swallows his last gulp of some piss-water light carb-conscious beer, then finishes, his voice heightened with excitement. “Oh, hey…you guys hear that oil company found black gold on the Lancaster place? That’s next door to you.” He nods my way and shoves his empty mug toward Phil.

Phil nods, but I’m barely listening. My balls have been in a square knot all fucking day for two reasons.

One, she almost always comes to town on this day. The day before Christmas Eve. She’s usually at the parade but I didn’t see her today and I can’t stop worrying that something’s happened. Or she’s not coming this year.

It’s been five years since I first saw her holding her grandparents’ hands at the parade and even then a force stronger than a Category Five hurricane whipped up inside of me. It was more possessive and protective back then, but as the years went by it spun into something far more dangerous.

The second reason my head is fucked, is I know her birthday was two months ago. The restraint I’ve shown in the past is fraying. The legalities that have kept my lust at bay are no longer in place.

It’s the only thing that’s kept me away. The nights I’ve lain in bed, plotting and planning how to get her underneath me. How to secure her into my world. All weave together now as I wonder how long my humanity will last before I do unspeakable things to bind her to me forever.

“Yeah. Old Mr. Lancaster was in here couple days ago. Says they’re pumping a hundred barrels a day from the two wells they hit out there. Making him a fortune.”

“He’s an asshole,” I grumble, taking a long swig of the new mug of beer in front of me.

“Yeah, but he’s a rich asshole now.” Donald slaps a hand down on the bar top, making me jump and my fingers ball into fists. “Hear the company is looking for more land owners for drilling leases around there. Has to be twenty acres or more. Maybe you should throw your hat in the ring.”

Phil gives him a hard stare then rolls his eyes.

“What?” Donald throws his hands up.

“Sometimes you’re the asshole,” I tack on as he shrugs and looks innocent. “I don’t own the fucking land.”

I growl under my breath. It’s a known fact with the locals here in Frankenmuth, Michigan, that my family has been the local reindeer stewards going back three generations. I’ve got two hundred acres, including the barn and cabin I call home.