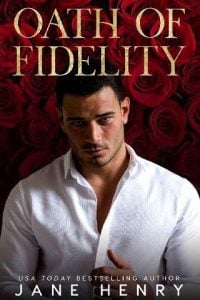 I stare at the cracked tile that leads to the altar of Saint Anthony’s and remember how it broke. I wonder if anyone else here does. Not everyone can say they recall the way their father body slammed the alter server on their first Communion day.

Why’d he do it? Who the hell knows. The kid probably looked at him funny or showed my father what he thought was a form of disrespect.

I can still see the way my mother’s face grew cold and impassive, her typical response to my father’s fits of rage. Unless his fury was aimed at one of us. Then, we saw another Tosca Rossi, one whose own face and body bore the brunt of his fury and anger when she came between him and us. My father was, after all, a psychopath. He bled out over a year ago on the very property where I was born.

We didn’t try to save him. It was time.

I wonder sometimes if mental illness is genetic. I wonder if it knocks on my own door, but I refuse to answer it. It’s the age-old question I think most men ask themselves at one point in their lives.

Will I become my father?

I fold my hands and listen to the gospel readings, chosen by my sister-in-law Angelina for the special occasion of her son’s baptism. My niece Natalia fidgets uncomfortably in her seat, and when she looks at me, I put my finger to my lips to remind her to be quiet. I soften the correction with a wink to show her I’m as bored as she is. With a sigh, she turns around and obeys.

Elise catches my eye. I feel my body go rigid, a coldness suffusing my limbs. She blinks and starts as if struck, then turns to Angelina and whispers something. Angelina hands her the sleeping baby dressed in the traditional white gown used for every Rossi family baptism.

Elise is my betrothed.

Elise and I didn’t choose this. Few of us in The Family ever do.

I think of every sacrament we endured within the walls of this church. While I was way too young to remember my own baptism, I remember Mario and Marialena’s, my younger brother’s and sister’s. I remember how Mama bought us small, matching tuxedos, and how my father made us polish our shoes. I remember my older brother Romeo making me and Orlando sit still when we fidgeted. I remember first Communions, a few of my cousins’ weddings, and the somber funeral for my father, probably the only funeral I’ve attended where not one person shed a tear. Romeo ordered champagne for the funeral brunch.

As I remember the sacraments we’ve celebrated here… I know why that broken tile’s never been replaced. Romeo himself probably ordered it kept there, since he’s the church’s largest benefactor and has a say in all repairs and projects. But that tile… it’s a stark yet subtle reminder of the power the Rossi family holds.

I’ve looked over my family’s bookkeeping for years. We singlehandedly support this church. There’s a reason why Saint Anthony’s is the most affluent in all of Massachusetts.

My brother Orlando clears his throat and wiggles his eyebrows at me. The whole church is silent, expectant, even the organ still as he waits for me. I’m baby Nicolo’s godfather. It’s time.

I stand and join Orlando, who beams as he walks to the altar beside his beautiful wife Angelina. They both smile at me, but I don’t share their joy. Angelina nearly threw my family into ruin. She forced my hand in ordering the execution of a man I never wanted to kill. It’s because of her I’m marrying the woman beside her.

“Come, godfather,” my future wife murmurs. “You’re supposed to stand beside me.” I don’t like her telling me what to do in even the most innocuous way, so when I give her a look that seems to startle her, she softens her tone. “Please.”

She bends her head toward the baby and nuzzles Nicolo’s soft, fuzzy head. His white satin bonnet has fallen to the side, attached loosely to the traditional gown with a matching satin ribbon. I watch as she kisses the baby and still doesn’t meet my eyes.

Beautiful, proud Elise Regazza walks by my side to the altar. A foreshadowing of things to come? We’ll walk this same path in only four weeks. But today, we’re the chosen godparents for Orlando and Angelina’s baby, so we take our place where we belong.

Elise Regazza may be many things—spoiled, headstrong, and materialistic, to name just a few—but the woman is lovely. Stunning, really. Shorter than me by about six inches, she still stands tall in chunky heels. She has the same light brown hair as Angelina, the one character trait that allowed them to pull a temporary identity switch at one time. Now, however, Angelina’s highlighted her hair lighter, making Elise’s look slightly darker in comparison.